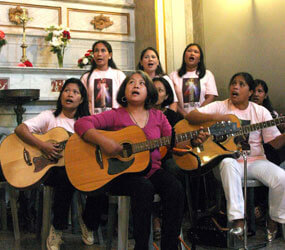 VATICAN CITY – Just 13 months after he visited the Holy Land, Pope Benedict XVI will give Christians in the Middle East his full attention again as he visits Cyprus June 4-6.

Christians on the small island in the eastern Mediterranean Sea share a biblical heritage with Middle Eastern Christians and face some of the same challenges in finding ways to live in peace and security in a land shared with people from other ethnic and religious groups.

Since 1974, Cyprus, which is about half the size of Connecticut, has been divided. U.N. peacekeepers patrol a buffer zone between the area controlled by the government of Cyprus and about one-third of the island, which is controlled by Turkish Cypriots.

Negotiations to end the island’s division are continuing – President Demetris Christofias and the recently elected Turkish Cypriot leader Dervis Eroglu met for the first time May 26 – but relations are peaceful enough that tourists and residents cross the buffer zone with relative ease.

A key sticking point in the negotiations is how to convincingly guarantee the full rights of the Turkish Cypriot minority, a predominantly Muslim community, on an island whose population is predominantly Orthodox Christian.

The question of minority rights, particularly when a large segment of the minority has a different religious tradition, is a concern in many parts of the Middle East. The region’s Catholics also are challenged to improve relations with their Orthodox neighbors and to promote dialogue with fellow citizens who are Muslims.

During the pope’s visit to Cyprus, he will meet with Catholic patriarchs and bishops from throughout the region and give them the working document for the special Synod of Bishops for the Middle East at the Vatican in October.

The theme of the synod is: “Communion and Witness: ‘The Community of Believers Was of One Heart and Mind.’ ”

Pope Benedict and his hosts will have an opportunity not just to preach unity and cooperation, but also to demonstrate it.

The first event after the official government welcoming ceremony is an ecumenical prayer service at an archaeological park believed to be the spot where the apostles Paul and Barnabas preached in Cyprus, as recounted in the Acts of the Apostles.

The pope also is scheduled to hold a private meeting and luncheon with Orthodox Archbishop Chrysostomos II, head of the Orthodox Church of Cyprus and a strong supporter of Catholic-Orthodox dialogue. The archbishop made an official visit to the Vatican in 2007.

The government of Cyprus estimates the entire island has a population of about 854,000 people; around 76 percent belong to the Greek Cypriot community, which is predominantly Orthodox; about 10 percent are Turkish Cypriots, a predominantly Muslim community; and almost 13 percent are foreigners.

The Vatican estimates there are about 25,000 Catholics in Cyprus. Most belong to the Maronite Church; the Latin-rite Catholic community is composed of a tiny group of Cypriot Catholics and several thousand foreign workers, particularly from the Philippines and Sri Lanka.

The outline for the synod on the Middle East was released in January, setting out topics for the bishops and local Catholics to discuss and questions for them to respond to in preparation for the synod. Their input helped shape the document the pope was to present in Cyprus.

The synod’s outline said the main goals for the October assembly were “to confirm and strengthen Christians in their identity through the word of God and the sacraments, and to deepen ecclesial communion among the particular churches.”

A renewal of faith and improved ecumenical collaboration will also help Christians better understand their role in Muslim societies and how they can aid their nations by being authentic witnesses of Christ, the outline said.

Another key concern for the church, expected to be discussed at the synod, is that Christians are emigrating from many areas of the Middle East, including the Holy Land, seeking greater opportunities for their families and more freedom in countries without all the political tensions found in the Middle East.

Looking at the situation in Cyprus, Pope Benedict’s hosts from both the government and the Christian community are likely to repeat their request that he speak out in defense of Christian churches and monuments in areas controlled by the Turkish Cypriots.

George F. Poulides, ambassador of Cyprus to the Vatican, told Catholic News Service that hundreds of Christian churches in the North have been turned into hotels or restaurants or destroyed, “some 30,000 icons have been stolen and two cemeteries have been destroyed.”

On the other hand, he said, the government of Cyprus has spent hundreds of thousands of dollars maintaining mosques in the southern part of the island.

Thousands of Turkish Cypriots cross the buffer zone each day to work and thousands of Muslims from the Arab world come to the island to live and work, Poulides said, which proves that “there is no religious problem in Cyprus.”

“We have always been the crossroads between Europe and the Middle East, between Christianity and the Arab world,” he said.

“We hope the prayers and the good wishes of the Holy Father will help us reunite our island,” Poulides said.