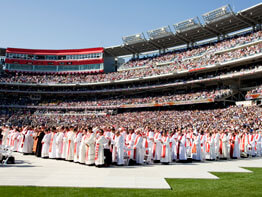 WASHINGTON – The Masses celebrated by Pope Benedict XVI in Washington and New York are the seventh and eighth papal Masses to be celebrated inside U.S. baseball stadiums.

Pope Benedict’s April 17 Mass was at Nationals Park in Washington, the brand-new stadium for the National League’s Washington Nationals. His April 20 Mass will be in New York’s Bronx borough at Yankee Stadium, the 84-year-old ballpark that will be replaced next year by a new stadium rising in its shadow.

Other venues for papal Masses have been football stadiums – although Yankee Stadium and other baseball parks have doubled as football stadiums in the past. Papal Masses also have been celebrated in the infield area at horse-racing tracks, in hockey and basketball arenas, in open-air fields and even on the National Mall.

Pope Paul VI celebrated the first Mass at a U.S. ballpark: Yankee Stadium, Oct. 4, 1965. It was also the only baseball-park Mass of his pontificate.

Pope John Paul II celebrated five Masses at baseball stadiums over the course of three different U.S. visits. While in New York City in 1979, he celebrated one Mass Oct. 2 at Yankee Stadium, and another Mass Oct. 3 at Shea Stadium. In 1987, he celebrated Mass Sept. 16 at Dodger Stadium in Los Angeles and Sept. 18 at Candlestick Park in San Francisco. In 1995, he celebrated Mass at Oriole Park at Camden Yards in Baltimore.

During Pope John Paul’s 1993 visit for World Youth Day, the pope took part in a World Youth Day welcoming ceremony at Mile High Stadium in Denver, which at that time was home to both the NFL’s Denver Broncos and Major League Baseball’s Colorado Rockies before the team’s current home, Coors Field, was built.

The other stadium venues for the late pope were the Los Angeles Memorial Coliseum, home of the University of Southern California’s football Trojans, and, at the time, the NFL’s Los Angeles Raiders (who have since returned to Oakland, Calif.); the Silverdome in Pontiac, Mich., then home to the NFL’s Detroit Lions; and Williams-Brice Stadium, in Columbia, S.C., home of the University of South Carolina Gamecocks.English-language texts for the homilies from most of the papal Masses in U.S. baseball stadiums are available online. Pope Paul VI’s 1965 Mass homily at Yankee Stadium can be found at: http://www.vatican.va/holy_father/paul_vi/homilies/1965. Pope John Paul II’s homilies at stadium Masses can be found online by the year they were delivered at: http://www.vatican.va/holy_father/john_paul_ii/index.htm.