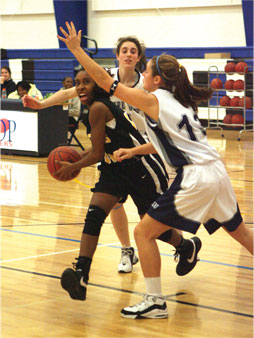 The St. Frances Academy, Baltimore, Panthers come into the 2007-2008 basketball season ranked second behind an experienced Seton Keough team. Despite the early polls, the Lady Panthers have been reigning champions for the past five seasons. Can they make it six?

Why not? The Panthers are out to a 5-0 start overall, including their first IAAM A Conference victory over Notre Dame Preparatory School, Towon, on Dec. 12 by a convincing score of 69-26.

The Panthers can put some points on the board. In fact, this past weekend, at the Breezy Bishop Classic at Western High School, the Panthers rocked National Christian School 89-50 and St. John the Baptist, New York, 58-35 in this second-year Round Robin Tournament.

Here’s the challenge: The Panthers return only two seniors, including top gun Kandice Green. Nonetheless, the Panthers are balanced, quick to the ball and tenacious.

The team is led by Green and sophomore point guard Shatyra Hawkes. Head Coach Jerome Shelton likes what he is seeing from sophomore Deanna Harmon and two African exchange students, juniors Alice Abiya and Sophy Ngobeni-Raisibe. “The language barrier is a little tough, but we’re working on it,” said a smiling Shelton.

With balanced scoring, better post-play and the experience of what it takes to be a championship team from the past several years, the Panthers are anxious to make a run for another title. When Shelton was asked about his expectations on the season, he simply said, “To get back to Villa Julie College,” meaning a chance to defend his team’s championship crown on Feb. 17 at Villa Julie.