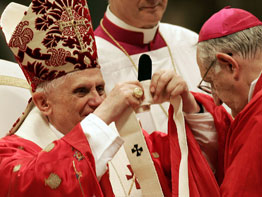 As Archbishop Edwin F. O’Brien prepares to travel to Rome to receive his pallium, he views the occasion not so much as a personal honor, but as a way of celebrating what the Archdiocese of Baltimore represents.

Pope Benedict XVI will confer the pallium, a white woolen vestment worn over the chasuble, on Archbishop O’Brien June 29 at St. Peter’s Basilica.

In the Latin rite, the pallium symbolizes the office of a metropolitan archbishop. As archbishop of Baltimore, Archbishop O’Brien is the metropolitan of the Province of Baltimore, made up of the Baltimore archdiocese and the suffragan sees of the dioceses of Richmond, Va.; Wilmington, Del.; Wheeling-Charleston, W.Va.; and Arlington, Va.

“It will be a great privilege for me to represent the great people of this archdiocese,” said Archbishop O’Brien. “It’s a sign of our unity as an archdiocese with the Holy Father and with all the other archdioceses and dioceses of the world.”

The archdiocese is leading a pilgrimage to Rome June 25-July 3 to celebrate the conferral of the pallium. The itinerary will include visits to St. Mary Major Basilica, the Basilica of St. John Lateran, the Vatican Museums and the Sistine Chapel.

Sean Caine, archdiocesan spokesman, said Best Catholic Pilgrimages, the travel agency running the pilgrimage, has received numerous calls about the event and has just added a shorter, less expensive package to give more people an opportunity to participate. Seven- and nine-day packages are available.

“It’s a unique opportunity for people to participate in something that does not happen often,” said Mr. Caine. “It’s a chance for people to connect with the universal church and deepen their personal faith.”

There is “plenty of space” still available on the pilgrimage, Mr. Caine said, “but to take advantage of current pricing, reservations should be made by the end of the month.”

The pallium is a circular band about two inches wide. It has two pendants, one hanging down in front and one in back, according to an archdiocesan information sheet compiled by Monsignor James D. Watkins of Washington. It is set with six black crosses of silk, one each on the breast and back, one on each shoulder and one on each of the pendants, according to Monsignor Watkins.

The pallium is made (at least partially) from the wool of two lambs under 1 year of age. In the Latin Church, a metropolitan is required to ask the pope for the pallium within three months of his consecration or, if already consecrated, of his canonical promotion, Monsignor Watkins said.

The pallium will be conferred on the feast of Ss. Peter and Paul.