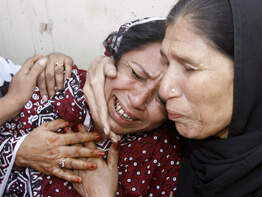 BANGALORE, India – The Pakistan Catholic Bishops’ Conference has condemned the bomb blasts that killed and injured hundreds of people marking the return of a former prime minister from self-imposed exile.

“We consider the killings at Karachi an act of extreme cowardice and terrorism, and demand that the government should ensure the safety of the lives of citizens,” said a statement issued Oct. 19 by Archbishop Lawrence Saldanha of Lahore, Pakistan, president of the bishops’ conference and chairman of the bishops’ National Commission for Justice and Peace.

Two blasts, including one by a suicide bomber, rocked the rally in Karachi Oct. 18. The blasts killed more than 130 and injured approximately 290 people who were celebrating the homecoming of former Prime Minister Benazir Bhutto, leader of the opposition Pakistan People’s Party.

The statement said the bishops expressed “solidarity and condolences with the families of the deceased” and condemned the carnage.

Demanding “fair and prompt inquiry of the tragic incident and strict action against the culprits,” the church has urged “citizens irrespective of religion, cast and creed to work for peace and harmony in the country,” it said.

Peter Jacob, executive secretary of the Pakistani bishops’ National Commission for Justice and Peace, told Catholic News Service in a telephone interview from Lahore that “the massacre has come at a time when the nation was looking forward to more open political action and revival of democracy.”

Bhutto’s return to Pakistan comes ahead of the general election in January.

“This is a wake-up call for all political parties to stand firm and united,” said Jacob.

Islamist groups had threatened to target Bhutto for declaring that she would not hesitate to allow U.S. forces to enter Pakistan in pursuit of Taliban and al-Qaida militants.

More than 97 percent of Pakistan’s nearly 165 million people are Muslim. Christians, Hindus and others make up just 3 percent.