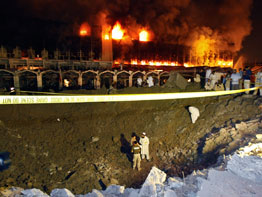 BANGALORE, India – A Pakistani church official condemned the bomb blast that claimed at least 53 lives and left about 270 injured at one of the premier hotels in Islamabad.

“We are stunned by this. We join the nation in deploring and mourning this despicable act,” said Bishop Anthony Lobo of Islamabad-Rawalpindi, secretary-general of the Pakistan Catholic Bishops’ Conference.

In a telephone interview with Catholic News Service Sept. 22 from his office in Rawalpindi, Bishop Lobo said that with the suicide attack “the terrorists have shown that they can do whatever they want … whenever they want.”

“All the churches in Pakistan held special prayers for the blasts victims,” added Bishop Lobo.

A truck carrying explosives was detonated Sept. 20 at a Marriott hotel in Islamabad after it was stopped by security guards at the gates. The hotel is situated less than a mile from Parliament and the president’s house.

Dozens of international dignitaries were at the hotel at the time of the explosion. The Czech ambassador to Pakistan was killed, and several other diplomats were among the injured.

The explosion came hours after President Asif Ali Zardari, in an address to Parliament, said, “We must root out terrorism and extremism, wherever and whenever they rear their ugly heads.”

Bishop Lobo said people “are really scared of suicide bombers, but they have to live with it (the situation).”

Bishop Lobo noted that media reports said the hotel was targeted due to the presence of Americans as well as scores of international diplomats in the wake of the recent incursion of U.S. forces into Pakistan from Afghanistan in pursuit of Taliban targets. The Associated Press reported Sept. 22 that top Pakistani leaders were to eat dinner at the hotel the evening of the blast, but plans were changed at the last minute.

Asked whether the attack posed threats to the new democratic government, Bishop Lobo said, “The new government has to go through tough times after taking over from long years of military dictatorship.”

However, he added that Pakistan has been “a victim of terrorism” for years now with the “Christian community also being affected severely.”