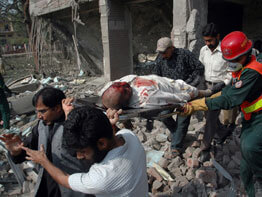 Initial reports said the blast killed two students at the church schools – one at Sacred Heart and one at St. Anthony’s – and injured more than 100.

Four members of the Caritas Pakistan staff were hospitalized for their injuries. Caritas Internationalis is the Vatican-based umbrella group for national Catholic charities around the world.

Honduran Cardinal Oscar Rodriguez Maradiaga of Tegucigalpa, president of Caritas Internationalis, sent a message of condolence to Caritas Pakistan and decried the bloodshed that continues “to destabilize Pakistan.”

“That Caritas staff who are committed to building peace have been caught up in the blasts only adds to the tragedy,” he said. “The country needs strong leadership at this time to find peace through dialogue. Violent attacks such as these can never bring about just peaceful solutions.”

Amid the devastation, with volunteers – including nuns and priests – trying to help, Father Jalal said that “dialogue with the violent groups is the only way out.”

Archbishop Lawrence Saldanha of Lahore felt the blast from his room, which overlooks the scene. “These are attempts to destabilize the country,” the archbishop told UCA News.

He said he hoped the new government elected in February would “resolve the issue through dialogue.”

Another blast that occurred simultaneously in the Model Town area of the city injured several people and demolished an advertising agency.

Muslim militants have been targeting government institutions in suicide bomb attacks. One such attack on the Lahore High Court killed 23 people Jan. 10. Last year, more than 500 people were reported killed in similar attacks around the country.