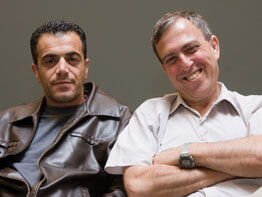 A desire to end the decades of violence that inflicted such pain is what drew Mr. Elhanan, 58, and Mr. Faraj, 32, to downtown Baltimore in early May to participate in Catholic Relief Services’ Peace in the Holy Land speaker tour.

Through the tour, CRS hopes to bring about a deeper understanding of the issues causing conflict in the Holy Land.

“We are connected by the high-priced ticket to get in the organization, which is losing someone close,” Mr. Elhanan said in a May 1 interview with The Catholic Review. “What connects us is the pain and the understanding of each other.”

Nearly 11 years ago, Mr. Elhanan received the life-changing news that his daughter, 13-year-old Smadar, died at the hands of a suicide bomber in Jerusalem. The grief was overwhelming, but Mr. Elhanan felt the need to reach out.

“When someone kills your (nearly) 14-year-old girl, you are very angry and you want to get even,” Mr. Elhanan said. “You can hate and start this endless cycle of violence, or you can try to understand. I try to understand.”

Mr. Faraj grew up in the Dheisheh Refugee Camp apartments in Bethlehem. He spent some of his youth bitter, often throwing rocks at Israeli army members and served three years in an Israeli prison. As he matured, he sought peaceful solutions for the ongoing hostilities. His desire to end the violence only intensified when his father, Ali, was shot in 2002 by an Israeli Defense Force member who believed Ali was carrying something other than groceries in his bags. Mr. Faraj could have turned to rage, like so many on both sides have in the endless conflicts.

“But, there’s another thing,” Mr. Faraj said. “I lost my father, but I did not lose my mind, too. I had to think about his soul, his message and his life, too, and to take all these things and to create something for the future – for me, my daughter and the people.”

The pair found The Parents Circle – Families Forum, where bereaving families of the region search for solutions to the conflicts in Israel and Palestine.

Both men will spend the next two weeks in the U.S., hoping Americans will call on their representatives to use their power for peace.

“If you just broaden one person’s mind, then it’s one person closer to achieving peace,” said Tom Price, Catholic Relief Services’ senior communications manager. “And Catholics can change this. Americans in general can change this. The only way to stop the humanitarian crisis and for people to feel genuine security, both Israelis and Palestinians, is peace.”