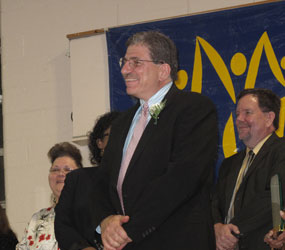 For several decades, Mark Pacione was the tireless champion of youth ministry in the Archdiocese of Baltimore.

He was honored May 5 for that service in front of hundreds of people at the Archdiocese of Baltimore Division of Youth and Young Adult Ministry Annual Recognition Celebration. A clearly moved Pacione received the Cardinal Shehan Award, the division’s highest honor, at the celebration held at Our Lady of Victory in Arbutus.

“It has been my honor to serve you,” Pacione told the crowd.

Pacione moved from director of the division to become the Associate Director of the Office of Schools Planning and Implementation in June 2009. Since then, he has continued to work with the youth in his parish, St. Pius X in Rodger’s Forge, where his wife, Carol, is also the pastoral life director.

“Mark is able to transcend boundaries,” said Sprankle, the youth minister at St. Louis in Clarksville.

Tamberino praised Pacione for his ability to bring thousands of people closer to Jesus.

“No one is a stranger when they are with Mark,” Tamberino said.

Pacione said his vocation was a blessing.

“We have all been infected with this passion to do youth ministry,” Pacione said.

Tim Janiszewski, youth minister of Lake Shore’s Our Lady of the Chesapeake, and Kellie Reynolds, youth minister of St. Stephen in Bradshaw, were given the Youth and Young Adult Ministry Medal of Honor. Both were celebrated for their abilities to go beyond their job descriptions and into something transformational.

Margaret Brogden, coordinator of youth ministry formation, said Janiszewski, a former engineer, also volunteers with youth at his own parish, Our Lady of Perpetual Help in Ellicott City, and mentors younger youth ministers.

Georgina Vaca, coordinator of Hispanic Young Adults for the archdiocese, said Reynolds lives her life with character and passion.

“Kellie’s commitment to expanding the world view and faith lives of her youth makes her ministry exceptional,” Vaca said.

Father Edward S. Hendricks, director of the Archdiocese of Baltimore’s Campus Ministry to Colleges and Universities, was given the Messenger of Light award. Father Hendricks, who ministers to Frostburg State University, will be taking a sabbatical in the coming months.

Paulist Father John E. Hurley, executive director of the Archdiocese of Baltimore’s Department of Evangelization, said Father Hendricks has been a champion for youth ministry since the 1970s.

Jane Andrews, Irene Wunderlich, Michael Miller and Ernestine Watkins were all given the For God and Youth Award for their tireless dedication to the youths of their parishes in Baltimore and Washington counties, plus Baltimore City.