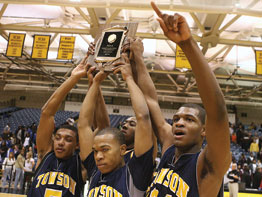 While at home waiting for the late afternoon finals game of the MIAA A Conference to tip off, Towson Catholic senior point guard Larry Bastfield was anxious. He was pacing around his house, making phone calls.

The Towson Catholic High School Owls weren’t perched atop the ladder throughout the season, yet they still remained a team to be reckoned with. After losing their big men, Donte Greene and Malcolm Delaney, last season, the Owls felt like they were flying under the radar this season – not getting the respect they thought they deserved.

The Owls knew what they had to do against the Mount St. Joseph, Irvington, Gaels: play tough defense, get physical under the boards and move the ball. With stellar double-teams, staunch defense underneath and keen outside shooting, the Owls defended their crown in front of hundreds of Towson Catholic fans by defeating the top-ranked Gaels 54-44 on Feb. 24 at the Towson Center Arena on the campus of Towson University.

The Owls moved the ball effectively, taking every opportunity to jam it inside on the Gaels’ big man, 6-foot-11 Henry Sims, a senior. And despite the height disadvantage that Towson Catholic senior, 6-foot-3 Brandon Greene had against Sims, Greene scored 14 points around the rim.

Most impressive was TC’s senior guard Vinny Breckenridge. He was on fire, pumping in a game-high 15 points. “I knew I had to step up,” said Breckenridge. “I knew they were going to play off me and concentrate on Brandon and Larry. I was ready and knew I could contribute to the team and this win.”

Coming off the Towson Catholic bench was junior Malcolm Sizer, a fullback-looking player whose main job was to put his body down low on Sims and tire him out. Although Sims finished with 14 points on the day, Sizer was snatching rebounds, leading with his elbows to the hoop and generally making his force known. Sizer came away with a bucket and fouled out midway through the fourth quarter.

Make no mistake – the game was tight throughout, knotted early in the second quarter 16-16 and then again in the fourth quarter 43-43 with 3:48 to play. From that point forward, the Gaels were practically held scoreless as Owls Greene, Bastfield and sophomore Julian Hester were automatic from the free throw line.

Head Coach Josh Pratt is in his third year at Towson Catholic. He has now delivered the Towson Owls to the MIAA A Conference finals in each of those years, bringing home two titles in those three trips.

The Owls (15-5, 20-11) came into the finals seeded third in the tourney and ranked eighth in the Metro Prep poll. During the season, though, they were unable to get past the mighty Mount St. Joseph Gaels, losing 67-48 and 71-62 in regular season.

The Gaels (17-2, 27-3), ranked in the Top 25 in the nation and first in the Metro Prep polls, dominated the prestigious MIAA conference, only falling to St. Frances Academy during the season, 57-51.

The teams will match up again next week as the Baltimore Catholic League tournament tips off in early March.