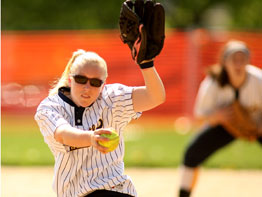 The Towson Catholic High School Owls have their softball season wrapped up. They are the top team in the IAAM C Conference and are headed to the playoffs in early May.

Head Coach Wayne Smith, in his second year, now wonders which conference he will move his Lady Owls to. This is a conference movement year for the 31-school IAAM league, and Towson Catholic has made a decision to elevate from the C Conference to either the B or the A Conference and battle the strongest teams in the area.

Defending champs, the Lady Owls, 10-0, 14-1 as of April 28, are led by sophomore hurler Jessica Butler. At the end of her freshman year, Butler made a verbal commitment to the University of Maryland, an unprecedented move for such a young, local, female athlete.

But Butler is that good. She is a pitcher and an offensive engine who turns the game her way day in and day out. On the mound, Butler has pitched 74 innings, struck out 161 batters for an ERA of .47. According to Head Coach Wayne Smith, Butler is “hitting the cover off of the ball.” The sophomore is 35 for 47 with 35 RBI, 14 doubles and three homers.

And it doesn’t stop there for the Owls. The team is packed with talent, youth and a belief that they can run with the big dogs.

Smith’s mantra for the team this year is: “If we aren’t moving, we aren’t playing.”

Behind Butler is another sophomore pitcher, Rebecca Alban, who has pitched four games and 27 innings, tallying 60 strikeouts.

Offensively, the team is strong, especially the Owls’ first four batters, each of whom are batting over .470 as of April 28.

Senior Samantha Smith, the coach’s daughter, is delivering as well with 19 RBI and a batting average of .487. Smith will head to the College of Notre Dame of Maryland, Baltimore, next fall to major in nursing.

With 20 players on the roster and a “no-cut policy” implemented by the school, the team is still able to move players around and presents a balanced level of experience in the field, starting three freshmen, two sophomores, two juniors and two seniors. However, the Owls lay it out; for them, it remains one game at a time.

Around the horn, Smith has Alban at third, freshman Kelly Smulovitz at first base and freshman Gina Toskes at second, giving them the experience and confidence to take this team forward.

Anchoring the outfield is junior Kirsten Smulovitz, a stellar athlete and a whiz kid in the classroom with a 4.52 GPA. Smulovitz is the team’s lead-off hitter and has stolen 27 bases thus far.