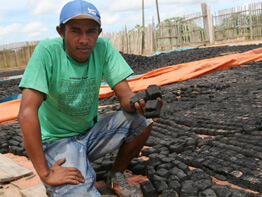 ACAILANDIA, Brazil – Around the world, men, women and children are drawn into forced labor, harvesting cacao in the Ivory Coast and sugar cane in Brazil, cutting timber in Peru, as sex workers in Europe and the United States, and as domestic workers in India.

Lured by false promises, they sometimes end up in debt bondage after receiving an advance on wages that they are unable to repay. Employers often take their documents so they cannot leave, threaten to harm them or their families, or take them so far from home that escape is not an option.

Much modern slave labor “connects to globalization,” said Mary DeLorey, a strategic issues adviser for Catholic Relief Services, the U.S. bishops’ international relief and development agency. “As (companies) outsource farther and farther away, there’s less accountability. It’s a race to the bottom as far as labor standards are concerned.”

The International Labor Organization estimates that nearly 12 million workers worldwide are involved in forced labor or slavery – 9.5 million in Asia and the Pacific, 1.3 million in Latin America, 660,000 in sub-Saharan Africa, and 360,000 in Europe and the United States, although recently released U.S. government figures put the numbers in the United States lower than other groups estimated. The International Labor Organization, a U.N. agency, calculates that the yearly worth of forced labor is about $32 billion worldwide.

Modern slavery is a form of labor exploitation linked closely to the growing problem of human trafficking, DeLorey told Catholic News Service. People are trafficked for the sex trade or forced labor not just from one country to another, but also within countries when long distances or language differences make it possible to isolate workers.

In poverty-stricken northeastern Brazil, men are recruited to work on farms, or they make charcoal in the central part of the country or in the Amazon region.
A mobile labor inspection unit set up by the government in 1995 rescues between 3,000 and 5,000 workers a year from slave-labor conditions, said Brother Xavier Plassat, a French Dominican working with the Brazilian bishops’ Pastoral Land Commission in the central state of Tocantins.

In 2003, Brazil implemented a plan to eliminate slave labor, increasing the number of courts that handle labor cases and enforcing fines for employers.

One of the most effective measures has been a “shame list” that names companies and employers that have used slave labor, Brother Xavier said. Inclusion on the list, which currently includes nearly 200 names, makes it difficult for companies to sell their products or obtain loans.

Fines ranging from about $25,000 to $2.5 million have also been levied in slave labor cases, posing “a real problem for the farms, because they often have to sell animals or equipment” in order to pay, Brother Xavier told CNS. Other human rights activists would go further, however, insisting that the government should confiscate the owner’s land.

But while sanctions have tightened, criminal prosecution of such slavery has lagged. The Pastoral Land Commission and other advocates have urged the government to shift the cases to federal courts, which they say would be less likely to let defendants off lightly.

State courts are “much closer to the offenders and the local oligarchy,” Brother Xavier said. “They don’t have any incentive to prosecute.”

Both DeLorey and Brother Xavier said much remains to be done to address modern slavery and the trafficking of workers.

The first step, DeLorey said, is “being aware that (the problem) even exists.”
The United States has programs to train police, health workers and social workers to recognize cases of slave labor. Parish staff members are also urged to keep a sharp eye out, DeLorey said, because in the little free time that slave laborers have they are sometimes allowed to go to church.

In Brazil, while officials are cracking down on offenders, there has been less action on “other measures that would help break the circle of slave labor,” such as policies for creating decently paid jobs for people at risk of becoming ensnared, Brother Xavier said.

“It’s difficult to get people to look at the real causes” of slave labor, said Carmen Bascaran, president of the Center for the Defense of Life and Human Rights of Acailandia, which helps workers who have been caught up in slave labor in the northern state of Maranhao.

The causes include corruption and impunity, she said, as well as a lack of jobs and poverty so severe that people are willing to take a chance on work from which they may be unable to escape.