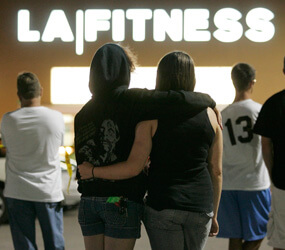 PITTSBURGH – An “outpouring of prayer” has come “from every corner of southwestern Pennsylvania” for the victims of a gunman who shot up a suburban Pittsburgh fitness center Aug. 4, said Bishop David A. Zubik.

“They will not be alone, and God is ever so close to them now,” the Pittsburgh bishop said in a statement issued Aug. 5.

“On behalf of all the faithful of the church of Pittsburgh, I offer my continued prayers and support to the victims,” he said. “May the families and loved ones of the victims be comforted in these painful days by the grace of God and the love of our entire community.”

According to a story from The Associated Press, the suspected shooter, identified later by police as 48-year-old George Sodini, walked into the LA Fitness center in Collier Township the evening of Aug. 4 and fired only at women in an exercise class. He fired at least 52 shots, killing three women and wounding at least nine others before fatally shooting himself. A fourth woman died later.

Police said the shooter, who was a member of the center, entered the facility with three fully loaded weapons.

Superintendent Charles Moffatt of the Allegheny County police was quoted as telling reporters that Sodini “walked right into the room where the shootings occurred as if he knew exactly where he was going. I think he went in with the idea of doing what he did.”

Witnesses said he may have been targeting an ex-girlfriend, but police said they were unsure of his motive, according to AP.

“When senseless acts such as the tragic shootings in Collier occur, our initial response can be anything from horror to hopelessness,” Bishop Zubik said.

“Humanity struggles to find some meaning, some message, some shred of something to hold onto when we are faced with lives taken, and others devastated by injury, in a few terrible moments of unspeakable violence,” he said.

But “families hold together with their strength and our support,” he added, saying that was evidenced in April, after three Pittsburgh police officers were fatally shot by a gunman as they responded to an emergency call.

Bishop Zubik described the Pittsburgh community as having a “deep and rich faith” and surrounding the victims of the fitness-center shooting and their families with “help, prayer and comfort.”

“We see that horror never wins, and hope is always there,” he said.