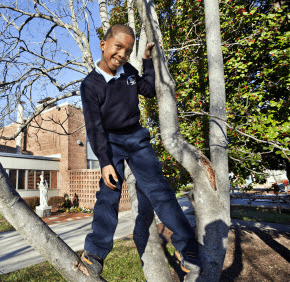 ARBUTUS – Anthony Hobbs is only a second-grader at Our Lady of Victory School, but the bright-eyed, smiling child has already selected a career.

The 7-year-old wants to be an actor as an adult, and is well on his way.

“It’s fun because you can meet a lot of cool people,” Anthony said.

Anthony portrays a young Frederick Douglass, who was born into slavery in Talbot County and escaped to become a social reformer, in “The Abolitionists,” part of American Experience, PBS’ historical documentary series. Its three parts are scheduled to air Jan. 8, 15 and 22.

“He’s a very intuitive child, almost beyond his years,” said Wendy Cottrell, principal at Our Lady of Victory, who described Anthony as “an extremely creative student.”

Cottrell plans to show the documentary to her older students near Black History Month, which is February. She also wants to have a question-and-answer session with Anthony and someone involved in creating the series.

Last March, Anthony spent two days shooting for his role in the series outside Richmond, Va. He was 6 at the time.

In his role, Anthony witnessed “his (screen) aunt being savagely whipped by her master,” said Rob Rapley, director, writer and producer of “The Abolitionists.”

Only on-screen for a few minutes, Anthony captured “an emotional range that few children of his age can match,” Rapley said.

“It’s not something most 6-year- olds have experienced or can convey,” Rapley said. “To find a 6-year-old who could do it successfully was a very nice surprise.”

Anthony’s role is nonverbal, “which in some ways is more difficult,” Rapley said. “If you have a speaking role, you can let the words do a bit of the work for you. He really seemed like a natural actor, which is a rare thing at 6 years old.”

Anthony’s résumé includes TV, film, commercials, print, voiceovers and online jobs. He has done commercials for the United Way and Children’s Claritin and has acted for TV shows on PBS’ “Kids Sprout.”

“Anthony doesn’t really like video games,” Moseley-Hobbs said of her son. “He’d rather be out living life. With the acting you get to do that.”