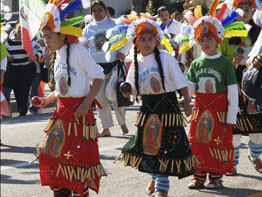 LOS ANGELES – Thousands of Catholics from throughout the greater Los Angeles area gathered in East Los Angeles Dec. 2 to honor Our Lady of Guadalupe as the mother of all peoples – from every language, race and culture.

A mile-long procession, the oldest religious procession in the city honoring Mary, led participants to East Los Angeles College Stadium, where Cardinal Roger M. Mahony and the auxiliary bishops of Los Angeles, numerous priests and more than 15,000 of the faithful gathered for Mass.

The theme this year was “Mother Without Borders: Bringing Down the Walls of Injustice.” The event was part of a statewide call to action for comprehensive immigration reform by the California Catholic Conference of Bishops.

“The Virgin of Guadalupe is a symbol of hope and compassion for all who are marginalized,” said the cardinal. “Today she continues to unite us as a humble people of God in search for understanding, compassion, peace and human dignity for all – especially for our immigrant brothers and sisters who are being kept in the margins of society by a broken immigration system.”

For the procession, which began near La Soledad Church on Cesar Chavez Avenue, scores of churches decorated banners and colorful floats. Aztec dancers and parishioners wore indigenous and multiethnic dress, many bearing images of Our Lady of Guadalupe, the patroness of the Americas.

The annual celebration recalls the miraculous apparitions of the brown-skinned Virgin Mary to St. Juan Diego at Tepeyac, Mexico, in December 1531. She left her image on his “tilma” or cloak.

For 476 years her image has been a symbol of unity, peace, compassion and hope for people around the world.

This year’s “Mother Without Borders” theme resonated with immigrant communities living in fear of workplace raids, deportations and family separation.

In his homily, Los Angeles Auxiliary Bishop Gabino Zavala, speaking in English and Spanish, called on all Californians to work toward immigration reform.

“I want to welcome in a special way those of you who are English-speaking, because you understand that Our Lady of Guadalupe – her message, her love – is not only for those of Spanish language and culture. But she is the mother of all of us, of every language, every race, every culture,” Bishop Zavala said to applause.

“Immigration is today’s sword, and it must be turned into a plowshare – an instrument that prunes away all the injustices and serves to cultivate right relationship among nations and peoples,” the bishop continued.

California’s Catholic bishops have called “for just and humane immigration reform,” he said.

“As those who have faith in Our Lady of Guadalupe I call you to join us today in demanding immigration legislation that allows us to transcend borders and break down the walls of injustice,” Bishop Zavala said.

Those walls “view human beings as illegal” and “view undocumented immigrants as criminals, subjecting them to imprisonment and deportation and leaving them without any possibilities of becoming United States citizens,” he said.

Among various measures, Bishop Zavala urged immigration legislation that would provide a legal path to citizenship for the estimated 12 million undocumented immigrants working and living in the United States and would prioritize the reunification of families separated because of mixed immigration status.

Among the thousands of Southern Californians participating in the procession and liturgy was Maria Antonio Rodriguez, a parishioner at St. Anne Church in Santa Monica.

She said she was there to affirm her belief that all people are human beings and no one should suffer discrimination.

“I am praying to Our Lady of Guadalupe, that through her people’s hearts may be moved, the ones that are putting up the walls,” Rodriguez told The Tidings, newspaper of the Los Angeles Archdiocese. “I hope they can change their point of view.”

Juan Sanchez, 19, attended with a dozen family members. A parishioner at St. Matthias Church in Huntington Park, Sanchez said he was there to celebrate how Mary brings all people together.

“If everyone believes in her, then there are no borders with her,” said the youth.

Dr. Truc Truong, a physician and parishioner at St. John Neumann in Irvine and St. Cecilia in Tustin, donated the thousands of red and peach roses that surrounded the images of Our Lady of Guadalupe and St. Juan Diego near the altar on the stadium field.

A Vietnamese-American immigrant who came to the U.S. in 1975, Truong has been donating 2,000 roses weekly to be placed at the image of Our Lady of Guadalupe at Hombre Nuevo, a Catholic multimedia center in El Monte.