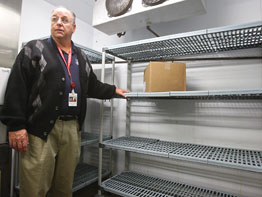 Dennis M. Murphy gestured toward bare shelves in the walk-in refrigerator at Our Daily Bread in Baltimore.

“Normally, all this would be full – these shelves here,” said Mr. Murphy, program manager of the daily meals service at Our Daily Bread Employment Center. “We’ve cut it as close as I’ve ever seen it in October.”

The number of casseroles contributed by donors fell 400, or about 13 percent, short of the 3,085 projected for October, Mr. Murphy said on Oct. 30. That prompted the meals program to dip into its emergency supply – consisting of canned foods such as tuna and ravioli – twice during the month, Mr. Murphy said.

“It looks to me like this economic problem is affecting people’s ability to help us,” said Mr. Murphy, who has headed the meals program for three and a half years.

“And if the economic struggles continue, then it’s going to trickle down and have a dramatic impact on our ability to help the folks most in need.”

Our Daily Bread, run by Catholic Charities, projects monthly food donations based on commitments from casserole donors including churches and synagogues.

Cash contributions, too, have dropped off significantly, and Catholic Charities is projecting a $100,000 shortfall in Our Daily Bread’s $500,000 dining program budget for the fiscal year ending June 30, 2009.

At the same time, Mr. Murphy said, the number of people coming to the center on Fallsway for hot meals has increased.

About 700 people a day normally eat at Our Daily Bread’s dining room, and the decrease in the number of casseroles donated is roughly equivalent to entrees for three days’ meals, Mr. Murphy said.

Kenrick Spence, a 51-year-old homeless man, savored a meal of hotdogs, beans and corn at Our Daily Bread on Oct. 31.

“You can’t thank God enough for something to eat,” Mr. Spence said. “At least you know Our Daily Bread is open seven days, and you always have a meal waiting here.”

The meals program served more than 250,000 lunches to poor and homeless people last year. Each day, 35 to 40 volunteers from churches, synagogues, businesses and schools serve, and the program has never closed in its 27-year history.