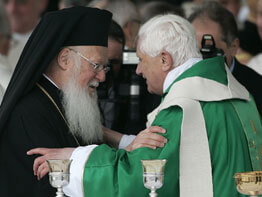 NAPLES, Italy – The only battle worthy of a religious believer is the battle against his or her own passions and prejudices, said Orthodox Ecumenical Patriarch Bartholomew of Constantinople.

“Because violence is an anti-value, it cannot be used to defend values,” the spiritual leader of the world’s Orthodox Christians said Oct. 21 at the opening of an interreligious meeting for dialogue and peace in Naples.

The meeting was sponsored by the Rome-based Community of Sant’Egidio and brought together more than 300 Christians, Muslims, Jews, Sikhs, Buddhists and followers of other religions.

Pope Benedict XVI, who was making a pastoral visit to the Archdiocese of Naples, greeted the religious leaders before the meeting began and shared lunch with them.

The pope had encouraged the religious leaders, telling them that violence and evil can never be justified in the name of God.

But at the formal opening of the interreligious meeting, Patriarch Bartholomew said it is obvious that religious differences easily can be turned into motives for war and hatred.

If cultural and racial differences are easy to exploit, he said, religious differences are potentially even more dangerous since religions are “characterized by an absolutism that is difficult to bend” and by a belief that God has given them the truth.

“So even in the field of religions one observes a growing sensitivity (to differences) that sometimes can transform into extremism and violence,” the patriarch said.

But, he said, “war in the name of religion is war against religion.”

The aim of religion must be union with God and with one’s neighbors, he said. A religion that lives in fear of what is different is not worthy of the name, he said.

“Violence will cease when each of us cultivates a holy and blessed vendetta against ourselves and our own passions,” and focuses instead on serving and loving God, he said.

Israel’s chief Ashkenazi rabbi, Yona Metzger, told participants that he had been seated at the pope’s table at lunch along with an Orthodox leader from Lebanon who expressed concern about the future of his country because of religious extremism.

“I told him I think we are in the same situation,” he said. “We must say something against those who carry the banner of religion, but sow terror. If we do not speak, we are accomplices.”

Rabbi Metzger called on the religious leaders present to denounce Iranian President Mahmoud Ahmadinejad and his past remarks about destroying Israel.

As he has done in the past, Rabbi Metzger also told participants it was time to “establish the ‘United Nations of Religions,’ which would be a mediator between religions.”

“If we sit together around a table, we will come to know each other and, certainly, people will be surprised to hear new things, new approaches, and certainly we would be able to find effective solutions” to tensions, he said.

Ezzedine Ibrahim, a Muslim scholar from the United Arab Emirates, spoke after the rabbi and said he, too, had been at the head table with the pope, and he felt that it was not appropriate to discuss the behavior of specific national leaders at a conference dedicated to promoting peace and dialogue.

“We Muslims,” he said, “confirm – anew and repeatedly – that we are wholeheartedly for peace with the world religions, nations, races and cultures.”

“All religions should respect one another and refrain from (making) unjustified accusations and ridiculous comments” about each other, Ibrahim said.

Asked if there had been tension at the pope’s luncheon table, the Muslim scholar told Catholic News Service Oct. 22, “There was.”

Rabbi Metzger “said a few things – I did not start it – and the cardinal of Naples (Cardinal Crescenzio Sepe) said the questions cannot be resolved in the time we have for lunch so it is better to focus on peace,” Ibrahim noted.

“I got the feeling that a conversation of that kind was not welcome at the pope’s table and the cardinal was very wise” to ask the other guests to change the subject, he said.

Ibrahim, Cardinal Sepe and Anglican Archbishop Rowan Williams of Canterbury all told reporters they did not think the pope heard the discussion since there were 10 people at the table and several conversations were going on simultaneously.