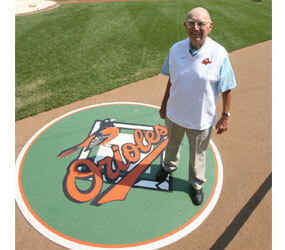 Ernie Tyler was the Iron Man before Cal Ripken Jr.

The Orioles longtime umpire attendant, who worked 3,819 consecutive home games at Memorial Stadium and Oriole Park at Camden Yards between 1960 and 2007, died at the age of 86 Feb. 11.

A funeral Mass was offered for Tyler Feb. 15 at St. Ignatius, Hickory, where he was a parishioner.

Tyler was remembered by owner Peter G. Angelos for his half-century with the team.

“Ernie’s kindness, loyalty and commitment to his work and to the Orioles defined who he was both at the ballpark and in his personal life,” Angelos said. “Ernie will be greatly missed by all who knew him and on behalf of the club I extend my condolences to his wife, Juliane, and his family.”

Tyler was married for 64 years and had 11 children, seven of whom also worked for the Orioles through the years.

He grew up at the since-closed St. Bernard parish in Baltimore City and attended Mount St. Joseph High School in Irvington. He was part of all three Orioles World Series championship victories.

He once told The Catholic Review that he cherished a Miraculous Medal given to him by his mother.

“It’s protected me in everything,” he insisted. “I have a lot of faith in it.”