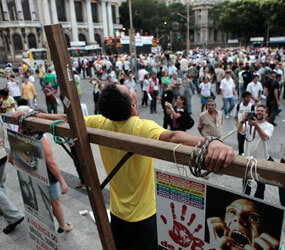 MEXICO CITY – Federal officials denounced the arson attack on the Casino Royale in Monterrey, Mexico, as an act of terror and blamed Los Zetas, the soldiers-turned-cartel-toughs and public-security scourge.

Other observers asked if the Aug. 25 attack, which killed 52 bettors and employees in Mexico’s most prosperous and industrial city, reflected corruption as much as terrorism.

With the country locked in a struggle against organized criminal groups – who have often infiltrated local police forces and governments – the issue of corruption has become even more urgent.

Corruption persists in Mexico and appears to be worsening, according to international surveys.

More than just providing the opportunity for acts of corruption, 71 years of one-party rule fomented a culture of corruption that persists to this day and has spread into Mexico’s other parties, said Ilan Semo, political historian at the Jesuit-run Iberoamerican University in Mexico City.

Comments in September by Bishop Onesimo Cepeda Silva of Ecatepec – who is considered close with many of Mexico’s political and business elite – appeared to confirm that culture when he joked with reporters about personally asking the country’s presidential candidates “not to pocket too much cash.”

The change of government in 2000 failed to bring about a reduction in corruption. Semo told Catholic News Service the National Action Party, facing a divided Congress upon winning power, opted to make deals with the Institutional Revolutionary Party, which “demanded impunity.”

The governing party, he added, has not been viewed by the public as being much better than its predecessor and has not made ending corruption a priority; the two most recent administrations in Monterrey, which have been tarnished by the casino scandal, belonged to the National Action Party.

Edgardo Buscaglia, an organized crime expert at the Autonomous Technological Institute of Mexico, estimates 72 percent of Mexican municipalities in 2010 had a “stable, open and notorious,” organized crime presence – where the authorities “at some level” were protecting these groups.

Criminal groups in Mexico compete with one another to capture the state, he said, adding that such competition generates violence.

In Central America, like Mexico, corruption is creating conditions for organized criminal groups to exploit weak institutions, and reports have emerged of weapons being sold directly from the military and police forces to drug cartels.

In Honduras, where a coup in 2009 left the country deeply divided, “the political system hasn’t been able to stabilize itself,” because of corruption, said Father German Calix, national director of Caritas Honduras.

“Corruption has generated conditions of little governability due to distrust. People do not collaborate much with the government because they feel that they’re going to be robbed,” he explained.

“It’s a chain that produces more poverty,” he added.

The rates of corruption in Central America vary: Guatemala and El Salvador rank slightly better than Mexico, while Nicaragua and Honduras lag behind at 127th and 134th on the Transparency International survey.

Farther south, corruption persists, but is not the rule. Argentina, Venezuela and Ecuador all suffer from high indices of corruption. But Chile, Uruguay and Costa Rica rank near the top of the survey – 21st, 24th and 41st respectively. The United States ranks 22nd.

“Chile, Costa Rica and Uruguay are the three exceptions in Latin America, where … corruption is a scandal, not the norm,” said Semo.

The situation in Monterrey highlighted how perceptions of corruption persist in Mexico and the degree to which it permeates the country’s political, legal and business arenas.

Five police officers near the casino at the time of the August attack failed to give chase as the assailants fled, and employees told media outlets the emergency exits were locked by the orders of the ownership.

Jonas Larrazabal later said he was collecting gambling winnings and selling products – such as string cheese and mezcal liquor – from his native Oaxaca state.

“People in Mexico would be willing … to tolerate corruption if the problem with insecurity was resolved,” Semo said.