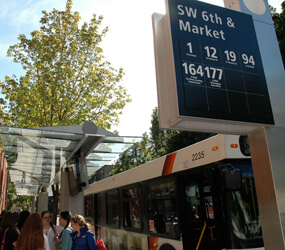 PORTLAND, Ore. – A deal reached by the city of Portland, the local public school district and the regional mass transit company offers free bus rides to high school students in the city – but only if they attend a public school.

The exclusion does not make sense to parents and students at Catholic schools, who say they pay as much in taxes as anyone – and are also under financial pressure to cover tuition.

“How do you give it to one and not the other?” asked Rachelle Moore, a single mother who is sending her 14-year-old daughter, Aucha-Nae, to Portland’s De La Salle North Catholic High School. Moore will squeeze the $26-per-month pass out of her budget.

“We have to pay taxes for public schools anyway,” said Kate Jesse, a sophomore at St. Mary’s Academy in downtown Portland, while standing with a half-dozen friends after school, waiting for a bus home.

Molly McMahon – also a St. Mary’s sophomore – points out that, unlike public schools, private schools have students coming from all over the city, not just the neighborhood. She said that means it would be useful, and environmentally effective, for private-school students to get the free passes.

Bob Mizia, superintendent of Catholic schools for the Archdiocese of Portland, heard about the free bus passes in the news. No one from the city or Tri-Met, as the transit district is called, contacted him about the program.

The policy contrasts with Mizia’s previous experience. In Louisiana, for example, Catholic schools get public money not only for transportation but for textbooks, he told the Catholic Sentinel, newspaper of the Archdiocese of Portland.

“Our parents are tax-paying citizens,” Mizia said. “Our Catholic schools are also registered with the state of Oregon. What is the point of not extending this to nonpublic schools?”

The Portland Youth Passes – which give free, unlimited rides through the school year – are available to the city’s 13,000 public high school students. There is no economic test; even students from wealthy families qualify.

For 30 years the Portland school system has received a federal waiver from providing yellow bus service to high schools because of the region’s extensive transit system.

The new program will cost more than $3 million. It is funded by $2.5 million from the sale of business energy tax credits, meant to promote practices that reduce the region’s carbon emissions. Also in the mix is about $800,000 from Portland Public Schools, which the district sets aside to pay for bus passes for needy students.

City, Tri-Met and public school officials say that allocation from the public school system is the reason only their students receive the benefit for now. But critics say that money comes from taxpayers, including those sending children to private schools.

Pat Barr, principal of St. Mary’s Academy, has fielded calls from parents frustrated about the exclusion of private schools. At St. Mary’s parking is at a premium, and many students use Tri-Met.

Portland’s Catholic high schools have about 1,900 students, many of whom attend with financial aid.

The Multnomah Youth Commission, a panel of students in the city of Portland and Multnomah County that includes private school enrollees, devised the plan and wanted non-public schools included. That idea faded after the city, the school district and Tri-Met reached an agreement.

But the model for Portland’s free bus pass plan, 100 miles south in Lane County, where the city of Eugene is located, does include private schools.

Lisa VanWinkle, coordinator of the Lane Transit District program, recalls no one ever suggesting leaving out private schools. The Eugene area’s pilot program focused on three public high schools, but once the benefit expanded, everyone was included, VanWinkle said.

Compared to Lane County, the Portland program’s size and the number of nonpublic school students make it too expensive to include private schools for now, said Roy Kaufmann, spokesman for Portland Mayor Sam Adams.

Kaufmann said City Hall is “100 percent” behind expanding the transit pass to all, but said the program itself and durability of the business energy tax credit funding need to be proven first.

Plans call for the student pass program to be extended to the entire metropolitan area, and that could include private schools, said Joshua Todd, youth development coordinator for the Multnomah Youth Commission, which covers Multnomah County and the city of Portland.