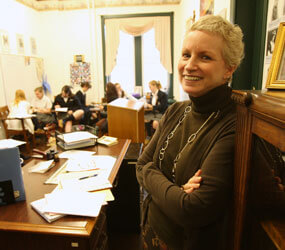 The epiphany came around Thanksgiving.

Colleen McDowell had reason to take stock. Her 2009 had been buffeted by a bout with cancer that had tested more than her physical health, shaking her independence, her routine and her self-admitted vanity.

Detailing the support and love that propped her up through that harrowing travail, McDowell was stumped by the question: What role had her church played in this, the most memorable of her 58 years?

McDowell responded with a shrug that said “not much.”

As she replayed the exchange for her husband, Wayne, the error of that knee-jerk reaction zapped her with the precision of a laser.

“I realized,” McDowell said, “that I don’t distinguish between my friends and my church. After family, that’s where my support came from.”

From an assortment of parishes on the west side of Baltimore to the marriage that flourished there, to a hospital and the high school where she chairs the English department, McDowell thrives on a web of relationships woven in Catholic institutions.

Last winter, McDowell was reveling in the prime of her life.

She loved her husband of 36 years, the preparations that were being made for the wedding of the youngest of their two daughters, her job at Mount de Sales Academy and good health that was bolstered by five aerobic workouts per week.

Her serenity was rocked by a diagnosis of an aggressive form of breast cancer on Feb. 13, 2009.

Every day since, McDowell has found comfort in family and friendships she made in church.

The day she met her husband in 1967, in Ocean City, they went to Mass. They were teens hanging out, Colleen entering her junior year at Archbishop Keough, Wayne having just graduated from Cardinal Gibbons.

Their last date before he shipped out to Vietnam as a Green Beret medic in 1970 included Holy Saturday service at St. Benedict, his home parish. They married in 1973 at her home parish, St. Joseph’s Passionist Monastery in Irvington, where their daughters, Krista, 35, and Ashley, 26, would be baptized.

The McDowells became fast friends with Passionist Father Richard Frechette, who would go to Haiti and earn a medical degree that he puts to use there. His M.D. status came in handy when McDowell’s tumor was surgically removed at St. Agnes Hospital.

“Because Father Rick’s a doctor, he was allowed in the surgery,” McDowell said. “He held my hand while I threw my guts up. If you want to see what Christ looks like, He looks like Father Rick.”

McDowell underwent eight chemotherapy treatments at St. Agnes between mid-March and late June, and then 36 radiation treatments, the last on Oct. 18.

Her husband was there for every one. Food and comfort came courtesy of St. Augustine in Elkridge, where Wayne is a Eucharistic minister, Colleen has served on the parish council, and both sing in the choir, which has included both of their daughters.

“I took that to every chemo treatment,” she said.

She praises the Breast Cancer Center at St. Agnes; Dr. Richard Hudes, a radiologist there, admires her sense of purpose.

“It’s always a benefit for people to keep as much continuity in their lives as possible,” he said. “Colleen scheduled her radiation treatments for 7:30 a.m. She had her index finger on her watch, making sure that she got to work on time.”

McDowell missed the last quarter of the 2008-09 school year, but returned for the current semester; it was as if she had never left.

“The school sent me a blanket in February, I stayed wrapped in that thing for four months,” she said. “That’s a metaphor, for them treating me with such care and concern.”

“Colleen told me that coming here gave her a purpose, but if she didn’t tell you, you wouldn’t know she was sick,” said Dominican Sister Catherine Anne Burleigh, the principal of Mount de Sales Academy. “Her joy and enthusiasm is contagious. She demands the best from our girls, and they respond.”

The school was closed Dec. 8, the Feast of the Immaculate Conception. McDowell met seniors Megan McCauley, Larissa Caple and Nicole Benzing for lunch.

“Those girls had joked about missing a field trip that included one of Colleen’s classes,” Sister Catherine Anne said. “She met them on her day off. She has a large-heartedness.”

That was a good day. Ditto for July 10, when McDowell’s daughter, Ashley, was married at St. Augustine, with Father Frechette presiding.

“It was 16 days after my last chemo,” McDowell said. “I had no hair, no eyebrows, no eyelashes. I was wearing a wig, false eyelashes and penciled on some eyebrows. … I was so happy.”

She shed the wig in late October, accepting a close-cropped hairstyle – along with her fate and all of her blessings.

“I’m a doubting Thomas,” McDowell said, “I want answers, I want proof, and yet I saw Christ in everyone who came to me and was so kind and generous and loving. When we are good, when we are our best selves, we are manifestations of God. I saw that so clearly.”