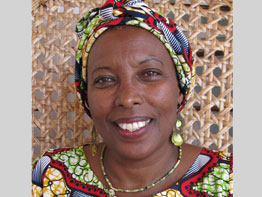 SEATTLE – A Catholic woman who has provided a safe haven for child victims of ethnic strife in Burundi has received the $1 million Opus Prize, billed as the world’s largest humanitarian award for social innovation.

Ms. Barankitse founded Maison Shalom in 1993 as a home for 25 children orphaned after a violent attack by ethnic Tutsis. It was the first year of a civil war between the Hutus and the Tutsis that would last 12 years.

Burundi continues to recover from the war, which claimed more than 300,000 lives. A half-million people were displaced internally and at least another half-million were driven from the country, according to estimates.

Ms. Barankitse’s organization has grown into a multiservice agency which runs 500 small houses where children are nurtured and supported so they can be reintegrated into loving families. Maison Shalom also recently opened a hospital.

The Opus Prize is a faith-based humanitarian grant awarded annually to an individual or organization of any religious background, anywhere in the world. Recipients must demonstrate a pioneering approach to solving the root cause of social problems in their community.

The prize is awarded by the Opus Prize Foundation through a partnership with a university or college “as a way to inspire lives of service,” according to a news release.

The foundation is a philanthropic organization created by the Opus Group, a national real estate development company with headquarters in Minneapolis and offices across the country.

“We are thrilled to be recognizing and supporting three amazing entrepreneurs for their transforming, faith-driven work throughout the world,” said Amy Sunderland, the foundation’s executive director. “These individuals show us that change is possible. They are an inspiration to us all.”

The news release said Ms. Barankitse’s work has allowed former child soldiers, street children and those made orphans by the war to learn to live together and to learn a skill so they can earn a living.