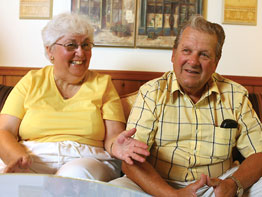 They say opposites attract, and that’s definitely the case with Gil and Loretta Hoffman. He’s playful, easygoing and crazy about sports. She’s a more serious, frequent letter writer to local newspapers who has a fondness for classical music and art museums.

As different as they are, the Hoffmans said they share a common love of their Catholic faith, a passion for prolife activism and a very deep commitment to making their marriage work. It’s what’s kept them together for 50 years.

Sitting side by side on a couch in their Timonium home, the parishioners of the Immaculate Conception in Towson said the secret to a happy and long union is taking marriage vows seriously.

“Love is about dying to yourself,” explained Mrs. Hoffman. “That’s what it’s all about, isn’t it? Romanticism is fine, but that’s not the glue that holds you together.”

With four children and 12 grandchildren, there were inevitable struggles that came with family life, the Hoffmans said. More recently, both have suffered from some health problems. But when one gives oneself totally to the other, both are supported, Mrs. Hoffman said.

“You can’t always rely on your own resources,” she said. “You have to turn to prayer and trust in God.”

Mrs. Hoffman called it a “blessing” to be present for her husband when he was dealing with colon cancer nearly five years ago.

“It was an opportunity to be of support for him and a chance to show my love for him,” said Mrs. Hoffman, glancing at her husband. Smiling mischievously, Mr. Hoffman remembered that when people asked what he gave up for Lent while he was battling cancer, he would always respond: “a third of my colon.”

The Hoffmans met when a friend of Mrs. Hoffman set them up. After getting permission from Mrs. Hoffman’s father, their first date was at a restaurant on Howard Street in Baltimore. There was a spark and more dates followed.
“I didn’t put her on waivers,” remembered Mr. Hoffman with a laugh.

They’ve had a few disagreements over the years, but, as Mr. Hoffman put it, “you have to roll with the punches.” Scrabble has been one of their great means of sticking it out when they are upset.

“It’s a tension breaker,” said Mrs. Hoffman. “If you can’t talk to each other, you can still play Scrabble.”

Both Hoffmans said raising a family has been the joy of their lives. They even took in a college student from Slovakia for four years while he was studying at Goucher College in Towson.

“Visitors say they wish they had a family like ours,” said Mr. Hoffman, a retired attorney. “We’re always going for walks or going crabbing or playing bocce ball. It’s that sense of togetherness. It’s good.”

Eight years ago, the Hoffmans wrote a “marriage mission statement” that today hangs on a bathroom wall.

“The mission of our marriage relationship is to be equally yoked with God so we can help each other get to heaven,” the statement says.
Two signatures are firmly affixed to the document.