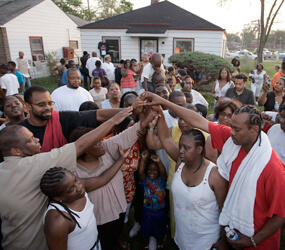 Some people are insisting there were two Michael Jacksons – the iconic entertainer and a bizarre, very troubled individual.

But there was always only the one man living out two sets of fantasies – his own and those of so many others.

Fantasies can be both inspirational and detrimental. But it is when they motivate us to be our best that they are life-giving.

Consider Olympians or scientists who give us groundbreaking discoveries. Many worked hard for years to realize what their spirit told them was possible.

However, their achievements were not always embraced on a monumental scale. While people worldwide appreciated what these remarkable people achieved, they didn’t always see themselves in their accomplishments.

It was this seeing of oneself in the journey of Michael Joseph Jackson, who died June 25 from cardiac arrest, that sparked an outpouring of crowds in streets and unabashed tears as people recollected the life of the Gloved One who overcame shyness every time he walked out on stage.

Shyness can be crippling for so many people. When I work on Catholic News Service’s religious education series (Faith Alive!), I am amazed by the number of Catholics who are uncomfortable at the thought of putting their names to a simple reply to a “Faith in the Marketplace” question! They prefer to have their priest speak for them or remain anonymous.

Rest assured, you won’t see any of them in the spotlight, attempting to moonwalk.

But who hasn’t, even for the most fleeting of moments, wondered what it would be like to strut Jackson’s signature moonwalk?

I’ve done it many times – in my mind. But I’d turn beet-red if someone caught me attempting to do that in my basement, let alone at an employee dinner dance.

But, wow! What if one day I found the nerve and actually did a respectable imitation? It would be so fulfilling personally because it would mean I mastered a fear and experienced absolute joy.

As human beings, we all are challenged to come out of our shells to achieve our full potential. But so much of our formation, our discipline says “hold back … not now … what if it is not received well?”

And so we live the reality of routine, daydreaming – until something out of the ordinary happens.

Entered Michael Jackson, not the child star, but the childlike adult who, like most adults, knew the meaning of love, of pain and suffering, of fantasy too wondrous to let go.

By virtue of his trade as an entertainer, Jackson could do all the things we were taught it was vain to do – wear flashy clothes and jiggle our bodies, offering freeze-frame poses that said, “Look at me!”

He sang, he danced demanding choreographies. He was so vainglorious!

No wonder Jackson’s death is so personal for so many people.

At death, when we are judged, Scripture tells us that all of our deeds will be tested by fire; what is worthless will be consumed as if “wood, stubble and hay,” and what is worthwhile will become our lasting reward.

And so it will be with Jackson’s legacy. Media, to be credible, must review the good, the bad and the ugly aspects of Jackson’s life. The public receives it, consumes what is tragic, then clings to whatever beauty remains.

Those who choose to remember only the good about Michael Jackson will do for him what we all want done for ourselves: to be remembered for the best that we were and tried to be.

And when we think on what is good, the reward is always an experience of love.