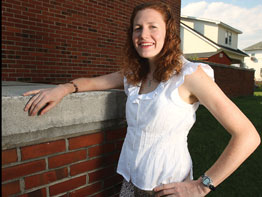 After graduation from Sarah Lawrence College, Justine Davies spent a year working in a Lasallian after-school program in Oakland, Calif., and living in a faith-based community. “That was very important to me, being in an atmosphere where we can feel comfortable praying together and sharing the faith,” Ms. Davies said. “Toward the end of the year, I realized I was ready to take the next step and try my hand at teaching.”

Ms. Davies found herself looking for a program that combined Catholicism, community, the opportunity for professional development and a location near her home in Pelham, N.Y.

Ms. Davies’ search took her to the Web site of the University Consortium for Catholic Education, where she discovered Operation TEACH (Teachers Enlisted to Advance Catholic Heritage), a two-year service program for college graduates who agree to serve in a Baltimore-area Catholic elementary or secondary school while earning a master’s in teaching from the College of Notre Dame of Maryland.

During Easter break in 2007, Ms. Davies toured Baltimore, interviewing with Dr. Curtis Turner, then Principal of TheSeton Keough High School, and staying at the St. Rose of Lima, Brooklyn, convent.

“As soon as I came to visit and saw what a warm community it was,” she said, “I knew it was the place to be, and I stopped looking at all the other programs. I just had this sense of coming home, as if this was where God wanted me to be.”

Through Operation Teach, Ms. Davies is about to begin her second year at Seton Keough, where she teaches honors biology, physical science and marine biology.

Spring applicants aren’t accepted until they’ve been offered a teaching position in the archdiocese. After graduating from the program, almost all are offered the chance to continue in their positions and most do.

While in the program, teachers live in small communities at former convents and receive a stipend and medical benefits. Besides St. Rose of Lima, communities are housed at Sacred Heart of Mary, Graceland Park, and Our Lady of Good Counsel in South Baltimore.

Operation TEACH covers the entire cost of the master’s degree, including books. The program is based upon ACE, Alliance for Catholic Education, which began in 1994 at the University of Notre Dame.

Sister Karen Kelly, G.N.S.H., director of Operation TEACH, joined the program in January 2002, just a few months after it began in the Archdiocese of Baltimore with only two participants. It has since graduated 43 educators.

Its success is “something we need to celebrate,” Sister Kelly said.

Many of the teachers are recruited at post-graduate service fairs on college campuses up and down the East Coast, attracting students interested in service opportunities within the church.

Operation TEACH is a “marvelous program,” said Sharon Derr, assistant director, who supervises the participants’ progress in the schools. “It provides an infusion of exceptional young people who would not otherwise end up teaching in Baltimore Catholic schools. It’s very rewarding to see bright, idealistic young people start out from scratch and become great teachers. It’s very edifying.”