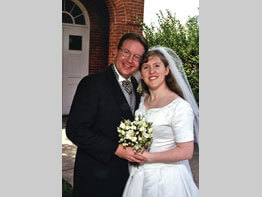 When Rita and John Buettner go to dinner parties, other couples inevitably start to share the sugar-sweet stories of how they met.

Mrs. Buettner always finds the story of her relationship with John adds “a little bit of shock value.”

“You’ll never guess,” she tells the unsuspecting. “We met online!”

Jaws drop and questions come at the Buettners lightning fast. The couple from St. Mark, Catonsville, give the impression they’ve known each other their entire lives.

“John really is the perfect person for me,” said Mrs. Buettner, a writer and editor for publications at the College of Notre Dame of Maryland. “We agree on all the fundamental things that matter. He’s just a very good balance for me.”

Mr. Buettner, who works for the University System of Maryland, tells anyone who will listen that the cyberspace gamble he took in 2003 on www.Straphael.net, now http://catholicmatch.com, has paid off immeasurably.

“I would be a lesser person if I hadn’t done it,” he said.

John and Rita were both longing to find a person who shared their religious values. She was working in the media relations office of McDaniel College in Westminster and had just left a lengthy relationship. He was also working in media relations, at Washington College in Chestertown.

Then in his mid-30s, Mr. Buettner found the Catholic dating scene sparse and frustrating. A co-worker had found his own wife on straphael.net and recommended John take that leap as well.

“I had a few introductions to women through friends, but I don’t think my friends knew what I was looking for in a person,” Mr. Buettner said. “One of the things about values is that you really can’t shake them off for the sake of marriage.”

Dating online was new territory for both.

Mr. Buettner joined the site but did not pay a required fee until Rita sent him a message after viewing his profile. She saw they both worked in media relations at small Maryland colleges and loved small, used bookstores. John read the message and pulled out a credit card, so he could access that fateful first message.

Site messages progressed to e-mail and then phone calls. After a month of talk, Mr. Buettner asked if Rita (nee Beyer) would like to go on a date, starting with a Mass at St. Mark.

“I couldn’t think of a better way to start our relationship,” she said recently. “It told me a lot about who John was as a person.”

Small nerves existed as each made their way to St. Mark. When they met at the church’s front entrance, John was “gentlemanly.” Neither could have imagined how significant the church would become for them years later.

“When we walk through those doors, the feeling is ‘We’re home,’” Mr. Buettner said. “This church is where our life started together, where our children will be baptized and where they will have their First Communion.”

The couple celebrated their fourth year of marriage Sept. 25.

“I never thought I would meet my husband online,” Mrs. Buettner said. “It’s hard to meet people in your 20s and you start to wonder if there’s someone out there who feels like I do. I found him.”

A graduate of Mount St. Joseph High School in Irvington, John said he marvels at Rita’s warmth and generosity and says she makes him a better man.

“Meeting Rita was like meeting someone you knew you wanted to be a part of your family for the rest of your life,” he said.