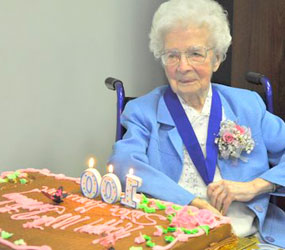 If the large house at 2102 South Road in Mount Washington could speak, it would tell happy tales of the 11-member Kunkel family who once lived under its roof.

There “Papa” and “Mama” Kunkel shepherded nine children, the oldest a blue-eyed girl named Genevieve Louise, born in 1911 – nine popes and 14 presidents ago.

“It was a happy home life,” said School Sister of Notre Dame Genevieve Kunkel, who celebrated her 100th birthday Jan. 3. “I was shaped by my home, my parents and my siblings.”

That character took the form of a witty optimist with a cheery demeanor, a nun noted for clever quips and quotes. She enjoys good health and good genes, as two of her siblings remain alive.

Spunk and spirit have carried this God-filled woman through a century of happy living and a successful career as an educator. She taught high school English for 30 years, before becoming director of sister education at College of Notre Dame of Maryland, then later its education consultant.

“Every day is good,” she said, dressed in a cloud-blue blazer and matching flowered skirt, a bright image in the dead of winter. White hair perfectly coifed was evidence of that day’s salon appointment, a simple pleasure she enjoys weekly to freshen her appearance on the premises of Villa Assumpta in Baltimore.

No surprise that the rosy-cheeked School Sister is featured in a chapter about the power of happiness and gratitude in Dr. David Snowdon’s 2001 book, “Aging With Grace: What the Nun Study Teaches Us About Leading Longer, Healthier, and More Meaningful Lives.”

As a participant in a study that began in 1986, she meets with Dr. Snowdon periodically for face-to-face evaluations, mouth swabs and blood samples. She has agreed to donate her brain to science.

Ahead of her time as a female college student, Sister Genevieve graduated in 1932 from the College of Notre Dame – as did her five sisters.

“Papa believed in education for the girls,” she said. “Six of us – that’s quite a record. We were all good students. Papa and Mama were so proud of us.”

That record, for the largest number of siblings graduated, still stands at College of Notre Dame of Maryland. Published in the history of the college is a reference to them as the “six fabulous Kunkel girls.”

“This shows their family was very committed to education,” said Nancy Carr, director of media relations for the college. “During the war (World War II) and Depression, not everyone was able to do that.”

Carr noted that a sister-in-law and niece of Sister Genevieve are CND graduates as well.

“The college means a lot to her,” said School Sister Bernice Feilinger, a local leader of the Maria Health Care Center who met Sister Genevieve in 1953.

Sister Genevieve entered the convent after her college graduation, admitting that she did not want to go.

Who had insisted she enter?

Her brother, the late Nicholas Kunkel, a Jesuit priest, influenced her decision by his presence in the seminary. As a novice, she took her brother’s name to become Sister Nicholas.

If their surname sounds familiar, that’s because it was a Baltimore household name for more than 100 years. Her father and uncle established Kunkel Pianos in 1905, initially William F. Kunkel and Company.

“Our house was always full of music,” said Sister Genevieve. “Papa used to play the piano on Sunday mornings after Mass.”

Her father once installed a piano in the White House, for then-president Warren G. Harding and his wife. When finished, the First Lady asked him to play her favorite song, “The End of a Perfect Day.”

Thankfully, he knew it.

She speaks often and pleasantly of “Papa.”

“And when I say Papa,” Sister Genevieve said, “Mama’s there, too. We’ll have a heck of a reunion when I die.”