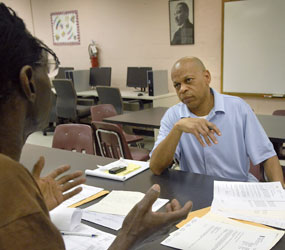 WASHINGTON – As the March unemployment numbers showed another increase in the percentage of jobless people, one profession is, perversely, in greater demand: those who can provide counseling services to people whose emotional distress has outpaced their financial distress.

In better days Oakland County, Mich., was ranked 26th in the United States in personal per capita income in the Census Bureau’s 2007 American Community Survey.

But “it’s not like I’m seeing a lot of GM and Chrysler execs,” said Pina Newman, a counselor for Catholic Social Services of Oakland County, who has an office inside the St. Joseph Parish rectory in Lake Orion, Mich. “I’m seeing a lot of people in the labor and construction industry. Carpentry, plumbing, electrical work – their trades are coming to a screeching halt.”

Newman said some of her clients – she works with 20 to 25 people and she doesn’t even work full time – are resigned to their fate in a state where the official unemployment rate in February hit 11.6 percent.

“Some people walk around with ‘this is my fate and this is where I’m going to be,’ and those people are chronically that way,” she said. “They might be candidates for medication.”

“We are simply beyond capacity at this point,” said Courtney Prentis, director of Catholic Charities Community Services Southside in St. Louis.

“We started seeing a surge starting late summer to late fall. We thought it would subside a little bit over the holidays,” because of the typical hustle and bustle of Christmas, she added. “That did not happen. … We’ve seen a surge again after the first of the year. We are looking at potentially running a wait list for nonurgent mental health needs.”

Southside got a grant to send one of its therapists to outlying parishes in its service area to spare poor would-be clients the expense of a two-hour round trip. “It’s a plus-minus,” Prentis said. “We are filling a full day at one parish. We can see six, seven clients at one parish. But at the same time, I have a therapist who’s out of the office.”

Dave Ross, a counselor and clinical director for the behavioral health care services division of Catholic Charities CYO covering San Francisco, San Mateo and Marin counties in California, said he sees a “spread of effect” in the clients who now come seeking help. It’s akin, he explained, to the “chain reaction kind of thing; you get in a five-car accident and four cars pile into the person.”

Ross said households are then forced to think about “things they never thought of before. Sign-ups for Little League are $150. Do you spend that for rent, food or your kid’s Little League?”

Parents feel shame, Ross said, as they believe “I should be able to rise above this.” It even affects the children, he added, as they say to themselves, “I should do more to help my family.”

Melissa Brestel, program supervisor of behavioral health outpatient services for Catholic Charities of Omaha, Neb., said trying to remove an individual’s depression in the midst of the economic slump is “a really huge challenge for us.”

“Before the economy got really difficult, you’d manage their stress and manage their depression. Unfortunately, we can’t help people get jobs. We can’t force the market to do what people need it to do,” she said. “We try to help them find meaning in their lives …. We help people redefine themselves a little bit differently,” through such things as volunteer activity or church programs.