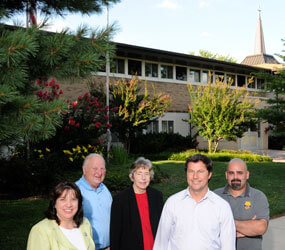 David Carberry turned a personal disappointment into ongoing volunteer efforts that benefit children and bring together adults who share a common past.

A divorced father of a 13-year-old daughter, Devon, and a 9-year-old son, D.J., Carberry realized he was going to be without his children this past Christmas. He decided that what he needed was not to dwell on his own situation, but to reach out to children in need.

He had spent his infancy at what was once a Catholic Charities orphanage and today is St. Vincent’s Center in Timonium, which provides residential treatment for children who have experienced profound abuse, neglect and trauma.

Carberry was adopted at the age of 15 months by James and Joan Carberry, who today are parishioners of St. Joseph Church in Fullerton. David Carberry’s brother, Mike, also was adopted from St. Vincent’s, so it was natural for him to focus on the children at St. Vincent’s.

Raised in an adoptive family and educated at The John Carroll School in Bel Air, the 41-year-old said, “I had love, and I had attention, and my heart goes out to these kids.”

Carberry, who works for Radio One and owns a digital consulting company, decided to use his marketing and computer skills to create a website, stvincentschristmas.com, to raise money for Christmas at St. Vincent’s. That, in turn, led to the development of an informal “St. Vincent’s alumni” network that has snowballed into ongoing fundraising and volunteer efforts.

Carberry uses social networking, and when he posted baby pictures of the day he met his adoptive parents on his Facebook page, he learned that one of his friends, Cindy Carson, whom he’d known for 18 years, also was adopted from St. Vincent’s.

“Since then I’ve been telling people, and I’ve met more and more who were at St. Vincent’s,” he said.

The website was a success, raising $2,500, which he used to buy Nintendo DS game systems at Best Buy and shoes at Shoe City. Both Best Buy and Shoe City donated additional items when they learned about St. Vincent’s.

“It was amazing,” Carberry said, adding that the hardest part was learning to ask for money.

“So many different organizations are asking for money, you don’t expect everyone to give, but the ones that do, it’s just a blessing.” He found that people liked the chance to make a targeted donation to St. Vincent’s.

He also started finding people who had been adopted from St. Vincent’s everywhere, including in the barbershop when he stopped in for a haircut.

“His enthusiasm for the program is spreading like wildfire,” said Ellen Torres, director of program campaigns for Catholic Charities.

Carberry, along with a friend and fellow St. Vincent alum Patrick Heffeman, became active at St. Vincent’s. Since then, Carberry and Heffeman have helped with the Walk/Run for Kids’ Sake, a 5K run and walk for St. Vincent’s Center in early April that raised more than $24,000, and the “alumni” organized a June 13 golf tournament at Towson Country Club.

“He is sharing his excitement and enthusiasm, and I think we’ll be able to grow this,” Torres said.

When Carberry was 25, his birth mother initiated contact, and Catholic Charities contacted him, explaining he had the option to accept or decline the request. He chose to meet her, and they have remained friends. He learned he had two other siblings who died young, “but she has grandkids through me,” he said.

His own children accompanied him when he helped decorate the gym at St. Vincent’s for Christmas, and when he’s apart from them, he plans to continue his efforts on behalf of other children.

“You meet these children, and you just know there’s a need still,” Carberry said.

Torres welcomes anyone who was adopted from St. Vincent’s, whether “they’d like to stay involved or if they’d just like to touch base with the place where they were adopted.”