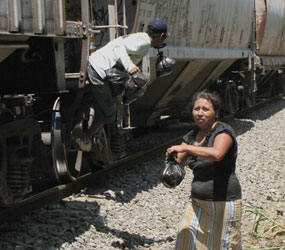 LA PATRONA, Mexico – The horn sounds and the ground rumbles, setting off a mad dash by a group of women armed with food and drink for the hundreds of hungry migrants riding atop “the train of the flies.”

Once at the nearby railway line, the women and several helpers assume positions along the tracks, holding out sacks containing lunches and bottles of soft drinks tied to long strings to reach the migrants’ outstretched arms as the train passes in a blur.

The scene plays out daily in La Patrona, where a group of 14 women have fed an ever-growing number of hungry Central American migrants for more than a decade, despite scant resources, trouble with the authorities and negative local attitudes.

The women never take a day off – “Not even for Christmas,” says Norma Romero, coordinator of the group known as Las Patronas. The name is drawn from their community of cane and coffee farmers in Veracruz state and refers to Our Lady of Guadalupe.

Las Patronas worked for years in anonymity but have gained international attention, reflecting an awareness of the hardships faced by northbound migrants transiting Mexico who have been kidnapped and preyed upon in large numbers over the past four years.

“The migrants are the famous people. They’re confronting the obstacles,” she said. “We’re here to accompany them.”

Las Patronas work with the Mexican bishops’ human mobility ministry and sometimes accompany migrants by more than just providing food – such as helping those who fall from the trains and lose limbs.

They also give talks in private universities, which now take up collections to provide staples such as rice, beans and cooking oil.

The speaking trips into big centers such as Puebla and Mexico City are bit much for some of the ladies.

They had spotted migrants riding atop the trains rolling through La Patrona, 185 miles southeast of Mexico City. But Romero says most people thought the migrants were just joyriders, hopping the trains on a lark.

“I didn’t know a thing about Central America or what’s below us,” Romero said.

Las Patronas learned soon enough about the migrants and began preparing bagged lunches for those riding the rails. Soon enough, word spread. The trains would slow sometimes slow while passing La Patrona. Migrants, meanwhile, were told by those going before them to watch for the nearby sugar mill.

Finding food for the migrants was difficult at times, Norma said. The ladies even picked mangos when resources were scant. They knocked on doors, asking for donations.

Equally difficult were the authorities: Romero says Las Patronas began working at a time when helping migrants was a crime. She recalled a local doctor refusing care to a sick migrant, saying he would be breaking the law.

Mexico has since approved a new migration law, decriminalizing actions in support of those in the country without the legal documents.

Confronting local attitudes presented another challenge. Las Patronas once had nearly 25 members, but many women quit because their husbands disapproved.

“Why are feeding these scoundrels,” Bernarda Romero, Norma’s sister, recalled some locals saying.

But a core group of ladies persisted, despite the opposition and lack of resources.

“We decided we’re going to do what we can, with what little we have,” Bernarda Romero said.

Las Patronas now have some resources, which come through donations, but they still dedicate much of their time to preparing meals for migrants.

They begin each day early with a run to fetch baked goods donated by a local supermarket in the nearby city of Cordoba. Meanwhile, some begin cooking big pots of rice and beans over an open flame on a property owned by Romero’s family, close to the rail line. Other items prepared for the migrants include eggs cooked with vegetables.

The women say sometimes the meals are the only nourishment many receive while riding a lengthy northbound leg of their journey between Tierra Blanca in southern Veracruz state and Lecheria, a rail yard on the north side of Mexico City.

During a recent visit, the train came early, meaning Las Patronas gave away bags full of pastries and bread, along with a wheelbarrow full of soft drinks.

After returning from the tracks, the women began preparing for the next the next train’s arrival, when the beans, rice and eggs would be given away.

Being able to offer such a bounty was unthinkable 15 years ago, said Bernarda Romero.

“When we started, we never thought it would become like this,” she said. “Thanks to God, the seed we planted is beginning to grow.”