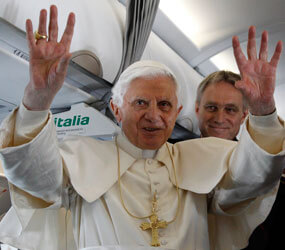 ABOARD THE PAPAL FLIGHT TO SCOTLAND – En route to Great Britain for a four-day visit, Pope Benedict XVI offered a strongly worded analysis of the priestly sex abuse crisis, saying the church was not vigilant enough or fast enough in responding to the problem.

“These revelations were for me a shock, and a great sadness. It is difficult to understand how this perversion of the priestly ministry was possible,” he said.

The 83-year-old pope spoke in response to questions pre-submitted by reporters aboard his chartered Alitalia jet. In other remarks, he said he looked forward to a fair hearing in Britain, saying the country had a long tradition of tolerance along with historical moments of anti-Catholicism.

Asked about sex abuse cases that have come to light in Europe and elsewhere in recent years, the pope said it was inexplicable to him how a priest who has promised at his ordination to act in the person of Christ, as a good shepherd, could “fall into this perversion.”

“It is a great sadness. It is a sadness, also, that the authority of the church was not vigilant enough, was not sufficiently fast and decisive in taking the necessary measures,” he said.

For all these reasons, he said, the church is experiencing a moment of penitence and humility, making an effort to renew its “absolute sincerity.” He thanked the bishops of Great Britain for the measures they have adopted to prevent sex abuse by clergy.

After a study by a British judge, Lord Nolan, in 2001 the bishops adopted a series of measures to protect children, including setting up a national office for child protection and encouraging the appointment of trained child protection officers in each parish and school. The bishops also made a commitment to turn every case of alleged child abuse over to the police.

The pope said the universal church has as its “first priority” the recovery of sex abuse victims. He said three things were necessary. The first was to help victims overcome their traumas, and restore their trust in the message of Christ, he said.

The second aspect, he said, was to mete out justice to guilty priests and help make sure they are excluded from any contact with young people. At the same time, he said, “we know this is a sickness, and free will does not function,” so in a sense the church is helping protect the perpetrators from themselves.

The third element, the pope added, was prevention, particularly in the choice of candidates for the priesthood, so that future cases of abuse can be avoided.

Pope Benedict was asked about criticism of his visit from some quarters in British society, including secular and atheistic voices. He said that he would try to make it clear that the church was not preaching a message about its own power, but about the saving message of the Gospel and the need to help the weak.

“I would say that a church that is trying above all to be attractive is already on the wrong road. Because the church is not working for itself, it is not working to increase its numbers. The church is at the service of others,” he said.

As for his reception in Britain, the pope said he was confident he would get a fair hearing.

“I am going forward with great courage and with joy,” he added.

He said his own message will focus on “the great figure of Christ” and the Gospel message of love, peace and reconciliation. The Catholic Church shares that task with the Anglican Church, and also shares common objectives with the British government, especially when it comes to battling evils like poverty, drug abuse and disease throughout the world, he said.

While his visit is not a political event, he said politics and religion share a common responsibility to work for good in the world. This cooperation is crucial for the future of Europe and the future of humanity, he said.

The pope commented on the figure of Cardinal John Henry Newman, whom he will beatify on the last day of his four-day visit. The 19th-century theologian remains an exceptionally relevant figure for the modern world because his faith was not the “formula” faith of the past but a questioning and thinking faith, the pope said.

That makes him especially important for our “skeptical culture of today,” he said.