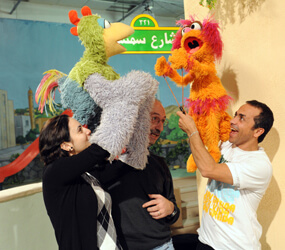 EL BIREH, West Bank – Muppet Haneen and her friend, Kareem the rooster, are learning how to dress themselves and have fun with their letters. They are discovering how to overcome their fears and accept differences in others.

They also learn to channel their anger and analyze situations.

Taping for one of the last episodes of the fourth season of “Shara’a Simsim” – the Palestinian “Sesame Street” – began one sunny Saturday morning in mid-November. The set background depicted a typical Palestinian town complete with a church and a mosque located side by side. The set featured a roost for Kareem, a little house for Haneen and a fix-it shop for the adult character, Salim, the handyman.

A group of schoolchildren, including students from the Melkite Catholic School of the Annunciation from nearby Ramallah, West Bank, were on hand as extras for a segment featuring the Arabic letter “meem” – equivalent to the English “M” – with Kareem as a game-show host.

Daoud Kuttab, a Catholic and the show’s executive director, said the “Shara’a Simsim” producers are committed to making the program feel and sound authentic and realistic to Palestinian children and, within that Palestinian reality, it is difficult to avoid politics completely.

In one of the segments this season a character worries about his brother in the Gaza Strip because the latter has not answered his daily phone calls. His Muppet friends suggest sending paper kites with a message, which the brother in Gaza sees, then realizes he had turned off his phone when he went to sleep.

Another segment features a fatherless child.

“Although we don’t say why, it is obvious the father might have been jailed or killed as a result of the prolonged conflict,” said Kuttab, who spoke to CNS via e-mail from Jordan.

Other segments deal with a child’s independence, with a real boy named Basel dressing himself on his own and then waving the Palestinian flag.

One of the main aims of the program, which this season focused on diversity and the responsibilities of good citizenship, is to show a different pattern of behavior, especially for boys so they can channel their anger and frustration, Kuttab said.

“Research shows that boys are more violent or introverted because of the general political situation, and the general tendencies of (Middle Eastern) society and culture to expect males to be the protectors of the family, something they and their fathers have been unable to do because of (Israeli) occupation,” he said. “Our aim is to provide children and parents with a clean and positive role model.”

He said his faith has influenced his work because he believes in the sanctity of life and that all people are created in the image of God.

“My faith also encourages me to instill values of respect and tolerance and to give importance to individuals, the family, society and the environment,” he said.

She said the show treats Muslim and Christian religious traditions very naturally because they are a normal part of Palestinian life.

Director Saed Andoni said the program also tries to teach young children how to think for themselves. Haneen and Kareem are depicted as thinking and analyzing situations on their own and coming up with solutions in a creative, nonviolent and often funny way, he said.

“I want kids to … have an independent mind and analyze each situation with their own judgment,” he said.

A separate Israeli version of “Sesame Street,” “Rechov Sumsum,” has the educational component and deals with the diversity within Israel and tolerance between its Jewish and Arab citizens.

Funding for “Shara’a Simsim,” which employs 20 people full time plus extras and occasional actors, is provided by the U.S. Agency for International Development. Production of the show has been done in consultation with the Sesame Workshop in the United States, but the final decision about program content lies with the local producers.