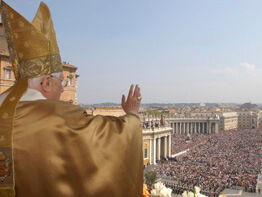 VATICAN CITY – In his Easter message, Pope Benedict XVI lamented the countless wars, disasters and horrors ravaging the world, including “the continual slaughter” in Iraq and the situation in the Darfur region of Sudan.

“Natural calamities and human tragedies that cause innumerable victims and enormous material destruction are not lacking” in the world, he said in his April 8 message, broadcast to millions of people in more than 65 countries.

The pope highlighted his concern for all those suffering from exploitation, hunger, disease, terrorism, kidnappings and the “violence which some people attempt to justify in the name of religion.”

While there were “some signs of hope in dialogue between Israel and the Palestinian Authority, nothing positive comes from Iraq, torn apart by continual slaughter as the civil population flees,” he said.

The political crisis in Lebanon, instability in Afghanistan, chaos in Somalia, economic collapse in Zimbabwe, and the “catastrophic, and sadly to say underestimated, humanitarian situation” in Darfur were some of the other places the pope listed as needing attention.

With all the suffering, evil and injustice plaguing the world, it is possible one’s faith in God might be put to the test, just as the apostles’ faith in Jesus had been shaken “by the scandal of the cross,” Pope Benedict said.

But such doubts, fears and disappointments help “purify all false concepts of God” and guide people “to discover his true face,” the pope said.

Instead of being a sign of apparent failure, Jesus’ passion and death show “the face of a God who, in Christ, has taken upon himself the wounds of injured humanity,” he said.

“Only a God who loves us to the extent of taking upon himself our wounds and our pain, especially innocent suffering, is worthy of faith,” the pope said.

While his resurrection did not eliminate evil and suffering, Christ did take all of humanity’s pains and trials upon himself out of love, and he “left us the love that does not fear death as the way to peace and joy,” he said.

Pope Benedict read his message and gave his blessing “urbi et orbi” (to the city of Rome and the world) after celebrating Easter morning Mass for about 85,000 people in front of St. Peter’s Basilica.
The basilica’s steps and central balcony were teeming with colorful tulips, daisies, hyacinths, blooming trees and other greenery, all donated by companies in the Netherlands.

During the outdoor Easter Mass, a choir from the Pontifical Russian College in Rome sang an ancient hymn from the Byzantine liturgy to commemorate Easter falling on the same day this year for both the Orthodox and Catholic churches.

The pope offered Easter greetings in 62 different languages, which drew huge applause, cheers and flag-waving from the jubilant visitors in the square.

During the April 7 Easter Vigil, Pope Benedict baptized and confirmed six women: two from China, two from Japan, and one each from Cuba and Cameroon.

Using a small golden shell to pour the holy water over each catechumen’s head, the pope also baptized the two Chinese women’s children – a small infant and a toddler, both born in Italy.

Baptism represents “a new beginning in life” in which “we are grafted onto Christ,” the pope said during the evening ceremony in St. Peter’s Basilica.

At the end of the candlelit Way of the Cross at Rome’s Colosseum April 6, Pope Benedict again reminded people of God’s infinite capacity to love and urged them to become messengers of that love through compassion.

Speaking without a text, the pope said the early Christian theologians considered the greatest sin of the pagan world to be a hardened, insensitive heart. Becoming Christian is to receive a tender heart, “a heart of flesh” that is sensitive and moved by the pain and suffering of others, he said.

During the two-hour service, the pope carried the black wooden cross for the first and last stations. Women and men from Angola, the Republic of Congo, Chile, South Korea and China, as well as two Franciscan friars from the Holy Land, were among those who carried the cross during the service.

Earlier April 6, Pope Benedict presided over Good Friday of the Lord’s Passion, beginning the rite by lying prostrate with his face on a pillow in front of the altar of St. Peter’s Basilica.

The preacher of the papal household, Capuchin Father Raniero Cantalamessa, said in his homily that humanity was in dire need of “a woman’s era: an era of the heart, of compassion” so that the earth would finally stop being a breeding ground of ferocity.

Christian women “are the hope for a more humane world” that is too caught up in a quest for knowledge and power that is lacking in love and mercy, he said.

Those who condemned Jesus to die were men, the papal preacher said, while those pious and courageous enough to accompany Christ throughout his passion were the women. Even his closest disciples had already abandoned the suffering Christ or were preparing to pack up and head for home, he added.

These and many other women today, such as those who work with the poor, prisoners, victims of HIV/AIDS, and “every brand of society’s rejects,” are not just for honoring, but for imitating, he urged.
Pope Benedict left the Vatican Easter afternoon to spend a few days resting at the papal residence in Castel Gandolfo, south of Rome.

At noon April 9, he recited the “Regina Coeli” prayer with visitors gathered in the courtyard.