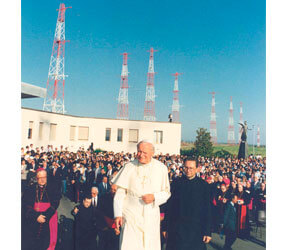 VATICAN CITY – Eighty years ago, a persistent pope and a scientific pioneer teamed up to create Vatican Radio, launching an evangelization tool that reached virtually every corner of the globe.

Today, Vatican Radio is riding the latest wave of digital technology to expand its audience and its services, with an Internet presence in more than 40 languages.

The anniversary celebrations kicked off in February with a retrospective Vatican Museums exhibit. Among the items on display was the microphone Pope Pius XI used to broadcast the first radio message to the world – in Latin, of course – on Feb. 12, 1931.

At that time, radio broadcasting was still in its infancy, but the pope insisted that he wanted his own radio station. He turned the project over to Guglielmo Marconi, the Italian inventor who developed wireless technology, who was only too happy to help.

It still stands as one of the most successful collaborative efforts involving the church and modern science. The image of Pope Pius at the microphone seemed to change the role of the papacy itself; from then on, every pope would be the church’s “first communicator.”

It’s a legacy Pope Benedict XVI wants to preserve and build on as the Vatican’s media adapt to the digital age. One of the pope’s first in-house visits at the Vatican was to Vatican Radio, where employees gave him an iPod nano pre-loaded with classical music.

In late April, the pope will address members of the European Broadcasting Union when they meet in Rome, and his speech is expected to highlight the church’s ongoing investment in communications resources and technology.

In 1931, Pope Pius saw radio as a God-given opportunity to reach countries where missionaries and other church personnel were not free to work. At the center of Vatican Radio’s mission, then and now, was the pope’s voice.

“The electric radio waves will carry your word of peace and your blessing through space to the whole world,” Marconi told the pope before the inaugural broadcast.

During and immediately after World War II, Vatican Radio broadcast more than 1.5 million messages to help reunite prisoners of war and refugees with their families. Some prisoners still remember the radio’s transmissions being played through the loudspeakers of internment camps.

After the war, Vatican Radio began a new chapter, broadcasting daily to communist countries behind the Iron Curtain. When East European communism gave way to democracy, the radio was inundated with more than 40,000 letters of thanks from Catholics and others who had listened to the programs for decades.

Vatican Radio still transmits to Catholic populations that are culturally isolated, which increasingly include large groups of foreign workers. In parts of the Middle East, for example, millions of Christian immigrants from Asia can tune in to Vatican Radio programs in various languages. Other broadcasts reach Catholic minorities in India, Pakistan, Sri Lanka, Bangladesh, Nepal and Bhutan.

Over the years, Vatican Radio has developed a staff that works not only in many languages but in 15 different alphabets. It’s a unique resource at the Vatican, one that positions Vatican Radio to be a key player in the digital age.

At a Vatican event in mid-February, U.S. Monsignor Peter B. Wells said in a speech that Vatican Radio has a crucial role in the modern world, as a voice for religious freedom, dialogue and harmony. To do that, he said, the radio needs to be savvy about modern media and technology, which can deliver a message to millions of people on their cell phones or other personal devices.

“It is no longer enough to go on air, to publish, to write. Today, one needs to be present in the marketplaces, to update the Web pages, in order to reach a world ever hungrier for news,” Monsignor Wells said.

“In other words, not having new technical tools at one’s full disposal, or not knowing about the most current tools, will mean that one’s message will arrive late, will arrive wrong and might even arrive in vain,” he said.

Monsignor Wells also spoke about media convergence at the Vatican. “Convergence,” a term used by Pope Benedict in 2008, has become a watchword among Vatican officials as they attempt to unify and coordinate the Vatican’s wide variety of communications tools – including TV, radio, newspaper, publishing and press office.

Monsignor Wells said convergence has already moved ahead, with increased cooperation between Vatican Radio, the Vatican Television Center and the Pontifical Council for Social Communications. But he said there are much broader and bigger plans to “establish the permanent presence of the Holy See in the world of new media.”

The speech by Monsignor Wells was significant in ways unique to the Vatican, and sent important signals. In effect, the U.S. monsignor was speaking for the Secretariat of State, where he is assessor for general affairs. He left no doubt that media convergence will not simply be a slogan at the Vatican.

In fact, Vatican officials are excited about the next big step in communications: the unveiling of a Vatican multimedia news site. The site will be a one-stop Internet portal for news and features from CTV, Vatican Radio, the Vatican newspaper, the Vatican press office and the missionary news agency Fides.

Officials plan to launch the project this year, perhaps as early as Easter. When it’s up and running, many expect Vatican Radio to take a leading role in providing content – the latest transformation of an institution that began with a pope and a microphone.