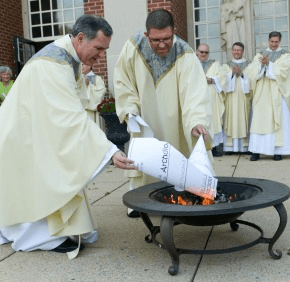 By Erik Zygmont
ezygmont@CatholicReview.org
Twitter: @ReviewErik
HAGERSTOWN – As parishioners gathered outside of St. Ann after 5:15 p.m. Mass June 11, Monsignor J. Bruce Jarboe held a lighter to a check for $8,214.50, and their subdued glee mingled with the smoke.

The brief ceremony, followed by a reception on the parish grounds, marked the 50-year anniversary, to the day, of the parish’s 1966 establishment. The faux check was the final mortgage payment – recently paid off early.

“It’s awesome,” said Glenn Marshall, 78, a “charter member” who attended Masses at the neighboring St. Maria Goretti High School before St. Ann was built. “I think it shows, being able to pay off our debt early, that we have a wonderful facility that will be serving folks for years to come.”

Those serving, and served, included Father Michael Jendrek, pastor of St. Ignatius of Loyola in Ijamsville; Father James Proffitt, pastor of St. John the Evangelist in Severna Park; Father Martin Nocchi, pastor of St. Mary of the Assumption in Govans and St. Pius X in Rodgers Forge; Father J. Collin Poston, pastor of St. Mary in Hagerstown, but soon to be of St. Anthony Shrine in Emmitsburg and Our Lady of Mount Carmel in Thurmont; and Monsignor Alfred E. Smith, retired.

The priests – who all have a connection to St. Ann – concelebrated the anniversary Mass with the main celebrant, Monsignor James W. Hannon, director of the division of clergy personnel for the Archdiocese of Baltimore, and Monsignor Jarboe, who preached the homily.

“There’s a very strong sense of community here,” said Father Poston, who was received into the Catholic Church at St. Ann in 1994. “People try to build on that community.”

Beth Hudak, who joined the parish with her husband, Alan, in 1978, concurred.

“I really met Jesus here,” she said. “I really figured out the whole faith thing through the priests here and the people here.”

Four of the Hudaks’ five children were baptized at St. Ann, and four were married at the parish, as well.

“The priests were in and out of our lives as our children were raised and were wonderful influences,” Beth Hudak said.

“There have been rough parts,” her husband allowed, “but it’s a microcosm of life. It’s home – that’s the best way to describe it, and I can’t imagine being anywhere else.”

According to a history prepared by members of the parish, St. Ann began with Monsignor J. Francis Leary’s purchase of 15 acres fronting Oak Hill Avenue. St. Maria Goretti High was constructed first in 1955, then a “gymnatorium” in 1965 and St. Ann Church in 1968. A parish center was added in 1990, and the Manalis Center – named for the late Monsignor Edward W. Manalis, pastor from 1991 to 2001 – in 2006.

Deacon Nairn was graduating from high school when St. Ann was established and returned to the parish after he finished college.

“Because of God’s blessing, that’s why,” was his response to a query about St. Ann’s success over 50 years.

Deacon Nairn also touted the growth of the parish’s outreach over the years, both locally and to its sister parish, St. Claire in Dessalines, Haiti. Among other ministries, St. Ann parishioners feed 720 Haitian school children every day through the “Littlest Angels” program, according to the parish website, StAnnChurch.com.

Additionally, St. Ann adults and teens travel to Haiti every year to lead an annual summer camp at St. Claire. The pastors of St. Claire and St. Ann visit each other’s parishes regularly.

“Our 50th anniversary certainly is a story of many memorable characters. Look around,” Monsignor Jarboe said in his homily. “What a joy, what a blessing, what a happy thing it is to be counted among a community that lives its faith and witnesses to its faith.”