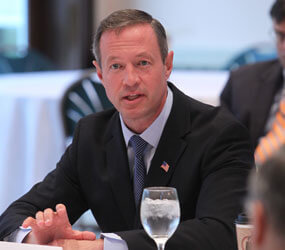 ANNAPOLIS – At the end of his first term, Gov. Martin J. O’Malley believes he has succeeded in promoting what he calls a “progressive” agenda for Maryland – expanding healthcare, opposing the death penalty, supporting immigrants, increasing the earned income tax credit and enacting the first living wage in the nation.

He’s looking for Marylanders to give him another four years along that same path.

“Our future is always ahead of us,” O’Malley said. “Whether or not it’s better depends on the choices and the works of men and women who believe in making the world a fairer and more just place.”

O’Malley spoke during an Oct. 4 interview with the board of governors and administrative board of the Maryland Catholic Conference, held at St. John Neumann in Annapolis. He also answered follow-up questions from The Catholic Review and other Catholic newspapers.

The governor asserted that “in the toughest of times,” his administration has “done good things” for Maryland in an inclusive way.

“My Catholic faith has taught me that there is no such thing as a spare person,” he said, “and we progress as a community in response to diversity.”

“There are times – as our church knows very well in this country, in times of economic contraction – when the Know Nothings and the xenophobes blame the last arriving group of new Americans,” said O’Malley, whose administration has provided funding for an immigrants advocacy group called Casa de Maryland.

“There are a lot of people who are capitalizing on this for political gain,” O’Malley said. “It’s an ugly use of an issue and I think all us need to be mindful that Christ often appears to us in the form of a stranger and all of us were once strangers.”

While he said there are times when state and local governments must work with federal agencies to detain and deport violent criminals who are in the state illegally, O’Malley opposes immigration laws such as an Arizona measure that requires state and local law enforcement officials to enforce federal immigration law.

O’Malley called capital punishment “inconsistent with a nation that is founded on the belief in the dignity of every human being.”

The governor defended his belief that abortion should remain legal.

“I believe that it is an issue that is best left to the individual conscience of women,” he said, “and in the meantime, as a society, we should do those things that we can to advance the dignity of every human life.”

O’Malley cited his expansion of health care coverage for children and his goal of eradicating childhood hunger in Maryland by 2015 as examples of the ways human dignity can be advanced.

Asked if he would support efforts to require abortion clinics to be regulated as ambulatory surgical facilities rather than doctors’ offices, O’Malley said he is awaiting recommendations of the State Department of Mental Health and Hygiene.

O’Malley said he is also awaiting guidance from the federal government about the question of abortion coverage in the implementation of federal health care reform.

Similarly, he said he is looking for guidance from the federal courts on the constitutionality of a Baltimore law that requires pro-life pregnancy resource centers to post signs saying what services they do not provide. Whether he would support a similar law at the state level depends on how narrowly it is crafted, he said.

Asked whether laws governing pro-choice pregnancy centers should match the standards of pro-life ones, O’Malley said “they probably should.”

The governor said he believes medical institutions with religious affiliations should have conscience rights protections and should not be forced to do things they find “morally and ethically unacceptable, repugnant or abhorrent.”

“At the same time, there also needs to be a candor and honesty and truth in advertising,” he asserted, “in terms of medical treatment, standards and functions offered.”

On the issue of gay marriage, O’Malley said he believed the “path forward” was “around the notion of civil unions.”

O’Malley pledged to maintain state funding for textbooks and technology in the non-public schools at the current level, $4.4 million. He also supports a business tax credit called Building Opportunities for All Students and Teachers in Maryland (BOAST). The program would provide tax credits for business donations to scholarship organizations that support students and teachers in nonpublic schools.

“I pushed hard for it this last legislative session,” O’Malley said, “notwithstanding that there were those who were pushing back very hard against it.”

Depending on how the legislation was crafted, O’Malley said he would also sign a bill that would prohibit landlords from discriminating against prospective tenants based on their source of income, such as federal housing vouchers.

“I know (U.S. Secretary of Health and Human Services) Kathleen Sebelius very well,” he said, “and I know she and President Obama are looking to Maryland to be a success story in the implementation of health care reform. I’m very much in favor of it.”

The former Baltimore City mayor and councilman credits his Catholic faith for playing a big role in his decision to become a public servant.