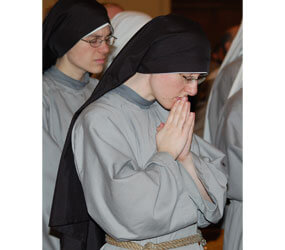 LONDON – In the silence of St Joseph’s Convent in Leeds each morning, Sister Catherine dresses herself in a gray habit. She fixes a black veil on her head and fastens to her waist a cord tied into three knots – representing the evangelical counsels of poverty, chastity and obedience – and she slips her feet into the sandals of a Franciscan nun.

Twelve years ago, when she was Kirstin Holum, she was reaching for her skates instead. In 1998 she competed for the United States at the Winter Olympics in Nagano, Japan. After placing sixth in the 3,000-meter and seventh in the 5,000-meter speedskating races, the 17-year-old was recognized as a prodigy racing against older women in their prime.

Instead of continuing her speedskating career, she joined the Franciscan Sisters of the Renewal, an order founded in New York in 1988. In September she arrived in England to work with the poor, with youth and to evangelize. She is a member of a community of four nuns – three American and one English – based in a house that, until last year, was owned and occupied by the Sisters of Mercy.

“I could have gone on” with speedskating, Sister Catherine told Catholic News Service in a Feb. 22 telephone interview. “I was thinking this (Vancouver, British Columbia) could have been my fourth Olympics, but I am so grateful the Lord led me to where I am now.”

When speaking to youth groups Sister Catherine makes no secret of her past as an Olympic speedskater because it opens up the possibility of a religious vocation to young people who would never have thought about it.

“Usually you get a shocked look,” she told CNS. “It is hard for children sometimes to picture you as anything else than a nun. It is definitely a starting point for evangelization, for bringing them closer to Christ, because they can see there is a real person standing in front of them and not just a nun.”

Kirstin Holum grew up in a suburb of Milwaukee. Her mother, Dianne Holum, was a speedskater who won an Olympic gold medal in 1972 and became a successful coach. She also was a fervent Catholic who conveyed to her daughter the importance of her faith; in 1996 she paid for her daughter to make a pilgrimage to the Marian shrine in Fatima, Portugal.

There, Holum, at the age of 16, felt a powerful sense of vocation and, she said, the “powerful experience of realizing Jesus’ presence in the Blessed Sacrament.”

She said she prayed to Mary for guidance about her future as a speedskater and, after she had competed in Japan, decided to give it up.

“I was not feeling in my heart that I would be skating the rest of my life; I knew there was more to life than sports,” she said. “I never regretted that decision. I think it was just a grace from God to bring me to something else.”

“I saw people making sports into the most important thing, and I didn’t desire that,” she said.

After retiring in 1998 Holum enrolled at the Art Institute of Chicago, specializing in photography. When she graduated she joined her mother in Denver and later spent three months on the Crossroads pro-life walk across the U.S., in which she developed the habits of daily Mass, praying the rosary, eucharistic adoration and “offering up sacrifices for the pro-life cause.”

On returning home she recovered a sense of vocation and began to pray for direction. The answer came in 2002 when she walked from Denver to Toronto – approximately 1,500 miles by road – and, at World Youth Day, encountered the Franciscan Sisters of the Renewal for the first time. A year later she joined them at their headquarters in New York, taking her religious name after St. Catherine of Siena, whose writings she found inspirational.

“I have never regretted a single day,” said Sister Catherine. “I am preparing to make my final profession of vows in June. I am seeing the Lord bring me to where he created me to be. I am preparing to say ‘yes’ to him for the rest of my life. … I will belong to him forever.”

“There is a lot of joy that comes from doing God’s will and a lot of peace, and belonging totally to him as his spouse is the most fulfilling thing I know,” she said. “I have been very, very happy since I entered the community.”

Sister Catherine has spent most of the last six-and-half years in New York, working with young people and helping in such community projects as soup kitchens. She is now helping the sisters settle in Leeds, in northern England, where they are still in the process of discerning their mission.

Committed to simplicity of life, the nuns have denied themselves a television and a video. This means that Sister Catherine cannot follow the Winter Olympics in Vancouver, though, she confesses, “I love reading about it.”

“It brings back a lot of good memories and it is nice to share with the sisters, too, all the memories I have,” she said.