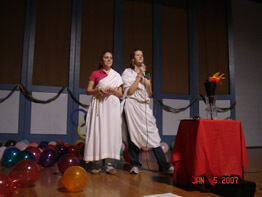 The large gymnasium stage at Sacred Heart, Glyndon, was draped with red, green, blue, black and yellow streamers Jan. 5, while Olympic rings hung on the wall and some 120 balloons scattered the floor.

The planning group for the Olympic themed lock-in, Katie Beinstein, Mary Bosley, Haley and Allison Boyd and Joe Miller, had worked on the event for high school-age youth for months and were anxious to see how everything played out on the rainy Friday evening.

“They really put their all into it,” said Mae Richardson, the boisterous youth minister for the parish. “It’s an opportunity to experience the church outside the building.”

The group of some 40 youth and a handful of adult chaperons gathered together at the foot of the stage and started with a prayer. At the closing of the prayer the theme music to the Olympic Games was heard and a decorated flash light, symbolizing the Olympic torch, was passed from one person to another until it reached the stage.

The youth were split into four groups and each represented a different country including Russia, Greece, Spain and Australia.

Haley and Mary, dressed in togas, enthusiastically took the stage to announce the rules for the evening and kick-start the first game, “rock, tree, bridge.” This marathon style game required each member of the team to become one of the objects (a rock, tree or bridge) while another team mate traveled through the human maze, from one end of the gym and back.

The second game tested not only the youth’s physical strength but their mental ability. The youth were split into two teams to face off in a “rock, paper, scissor championship challenge.” In the end no one really won or lost because everyone was awarded a medal or ribbon for participating.

“We want to bring youth together to have fun and share their faith,” said Katie who has been to many lock-ins and hope that the youth will make lasting friendships. “The Olympics is a sign of unity and the torch is the light of God being passed around to the youth.”

The lock-in was not all fun and games to these spirited youth. They arranged for a speaker, Ashley Fortino, a former youth group member and student at Villanova University in Pennsylvania, to come and speak to them about her mission trip to Honduras. She spoke to the wide-eyed young people about social justice issues in Honduras and all over the world. She encouraged and challenged them to make a difference.

“We are empowering the young church,” said Mary. “We want to help young people realize that faith is comforting and this is a safe place to go to share it.”

After the speaker, the youth gathered once again in the cafeteria to make 400 peanut butter sandwiches and label 400 water bottles to be delivered to Our Daily Bread in Baltimore the next morning. The labels on the bottles said, “We are praying for you” and “We haven’t forgotten about you.”

“Even though we are here having fun, we are still called to do service,” said Ms. Richardson.
There was even more fun to be had in the wee hours of the morning when many of the youth showed off their best dance moves in the gym. They also spent a half hour in a youth-designed prayer service.
“Faith can be fun,” said Haley. “It’s not just about sitting in church on Sundays.”

Before the tired youth went home to crawl into their own beds for a little more sleep, they ended the event with another prayer service to unify the group in faith and love.