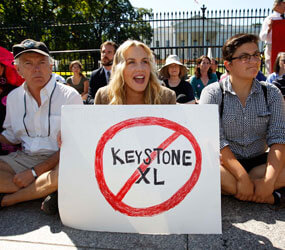 WASHINGTON – Maryknoll Father Jim Noonan hopes the five or so hours he spent in jail recently will be noticed by President Barack Obama.

A staff associate in the Maryknoll Office of Global Concerns, Father Noonan, 77, was among 65 people arrested Aug. 20 during the first day of a planned two-week protest to call attention to the environmental dangers he believes are posed by a proposed 1,711-mile pipeline to carry Canadian crude oil to refineries in Oklahoma and Texas.

“I wanted to do anything I possibly could to be a voice,” Father Noonan told Catholic News Service three days after his arrest for participating in the first sit-in. “I wanted to ask the president please do not authorize this pipeline because your children and your grandchildren will rue the day that this was authorized.”

Father Noonan’s angst is aimed at preventing Obama from signing a permit allowing construction of the Keystone XL Project by TransCanada Corp., from Montana to Texas. The pipeline expansion, opponents believe, would open the door to a rapid increase in oil mining in northern Alberta, endangering a fragile ecosystem and escalating the release of greenhouse gases.

The $7 billion project has raised sensitivities in both the United States and Canada. The debates revolve around the benefits of economic development and jobs in a deep recession and the long-term impact on climate change.

The issue has pitted labor union against labor union and community group against community group. Elected officials are eyeing potential new tax revenues to continue basic government services. Indigenous people in Canada fear the loss of their way of life should the mining expand rapidly or a disaster rob them of access to water and food.

About 50 religious leaders, including Franciscan Fathers Erick Lopez and Jacek Orzechowski, both parochial vicars at St. Camillus Church in Silver Spring, joined the protest Aug. 29. Father Lopez said he wanted to stress to Obama that the pipeline bodes ill for the world.

“Life itself is in danger right now if we don’t so something about climate change,” the Cuban-born Father Lopez told CNS.

At the center of the debate is the complex process used to extract viscous oil called bitumen from formations of sand, clay and water in an area known as oil sands or tar sands.

The Canadian Association of Petroleum Producers acknowledges that the process consumes more energy and water than conventional drilling methods, can require clear cutting of forests and leads to the necessity of storing toxic byproducts in manmade ponds, but maintains that opponents’ fears are overblown.

Obama faces conflicting views on the project within his own administration.

The U.S. State Department cleared the way for construction in a report released Aug. 26 that found the project poses no serious threat to the environment and will enhance national security. The State Department was given authority for the assessment in 2004 by President George W. Bush because the pipeline crosses an international border.

A series of hearings on the report was planned in the affected states – Montana, South Dakota, Nebraska, Kansas Oklahoma and Texas – beginning Sept. 26.

The U.S. Environmental Protection Agency in June questioned the findings outlined in the State Department’s draft of the report, saying that not all ecological concerns were evaluated and that a significant oil spill could affect drinking water and sensitive ecosystems. The EPA pointed in particular to the dangers of a spill infiltrating the shallow Ogallala Aquifer in Nebraska, which provides drinking water to 2 million people.

In a 2009 pastoral letter, “The Integrity of Creation and the Athabasca Tar Sands,” Bishop Luc Bouchard of St. Paul in Alberta questioned the morality of exploiting the oil fields because of the danger posed to indigenous people and the environment.

The bishop doubted that oil mining made necessary by the pursuit of profit and to satisfy a consumerist lifestyle in the U.S. was worth the risk of enhancing climate change.

“The letter is addressed not so much to the (petroleum) workers as to the CEOs in the companies,” Bishop Bouchard told CNS Aug. 24.

“God has given us creation and we have a responsibility to that,” he said.

Company spokesman Terry Cunha said the question of where the United States gets the oil it needs has almost been lost in the debate.

“They (Americans) have to decide where they want to get the oil: from Canada where there are similar regulations and rules and values or from countries … where the values are not the same,” he said.

Canada’s reserve of heavy crude is the third largest in the world, behind Saudi Arabia and Venezuela. The United States obtains 20 percent of its crude oil imports from Canada.

Economics also enters into the picture. A 2010 study by the Perryman Group, a financial and economic analysis firm based in Waco, Texas, projected that the pipeline expansion would pump $20.9 billion into the U.S. economy over its lifespan.

Pipeline construction, expected to be completed in 2013, would create about 20,000 jobs, Cunha added.

He also said the company is working to ensure that environmental risks are minimized.

Travis Davies, spokesman for the petroleum producers association, denied that oil mining poses a great danger to the environment. The process accounted for 6.5 percent of Canadian greenhouse gas emissions in 2009, he said.

Davies also disputed claims that the entire boreal forest in the oil sands region in Alberta and a small part of Saskatchewan – about 55,000 square miles – would be destroyed by the mining process.

Overall, he said, about 20 percent of the area could potentially see oil mining, while the rest of the oil would be obtained through conventional drilling.

In addition, he said, the Canadian and Albertan governments require oil companies to reclaim areas where land is stripped of trees once a mining operation is closed.