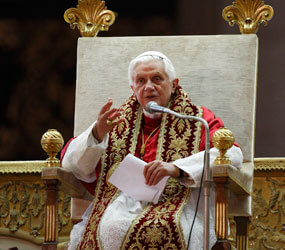 VATICAN CITY – Throughout his five-year pontificate, Pope Benedict XVI has made some of his most interesting comments off the cuff, often during question-and-answer sessions with priests.

His late-night meeting with 10,000 priests June 10 was a good example. Although questions were prepared in advance, the pope’s responses were unfiltered and impromptu – the kind of “organized spontaneity” for which his mind is apparently hard-wired.

Unfortunately, the world often misses out on these talks for a number of reasons. His vigil with priests ended close to midnight and a Vatican text wasn’t made available until several days later. Moreover, the pope used concepts and terms that weren’t exactly user-friendly to the mass media.

His response on priestly celibacy was a case in point and deserves a closer look. He was asked by a Slovakian priest to “enlighten us about the wisdom and the authentic meaning of ecclesial celibacy.”

The pope’s angle of attack was unusual. He did not speak about Christ’s own celibacy or the history of the celibate priesthood, or about any of the practical questions connected with the requirement of celibacy in the Western church.

Instead, he said priestly celibacy was a way for the priest to become more united with Christ and his mission, in an anticipation of “the world of the resurrection.” In celibacy, he said, the priest is pulled forward toward “the new and true life” of the future.

That creates a problem with the contemporary mindset, which seeks to close off God, the pope said.

“It is true that for the agnostic world, the world in which God does not enter, celibacy is a great scandal precisely because it demonstrates that God is considered and lived as a reality,” he said. In the eyes of critics, the influence of God in this world “is supposed to disappear,” he said.

In Pope Benedict’s analysis, the world’s problem with celibacy is not really about sexuality, but about the priest’s commitment to the call of a higher power.

He then turned to marriage and developed another rather surprising thesis: that celibacy has more in common with marriage than with the single lifestyle – which, he said, is increasingly fashionable today.

In short, he said, people who reject marriage in favor of “complete autonomy” are saying “no” to commitment. Celibacy is the opposite, a “yes” to God’s plan that is not unlike “the definitive ‘yes’ of marriage,” he said.

“Therefore celibacy confirms the ‘yes’ of marriage with its ‘yes’ to the future world,” he said.

Almost as an aside, he added that he was speaking of marriage as “the natural form of being man and woman,” which he said was “the foundation of the great Christian culture, of the great cultures of our world.”

“And if this disappears, the root of our culture will be destroyed,” he said.

In his final point, the pope referred to the priestly sex abuse cases that have been the focus of so much attention in recent months. Some critics have suggested that mandatory priestly celibacy may be a contributing factor in the crisis. The pope turned that idea on its head, saying that “celibacy, as the criticisms themselves show, is a great sign of faith, of the presence of God in the world.”

For that very reason, he said, celibacy is a “scandal” in the eyes of many people.

“We know that next to this great scandal, which the world does not want to see, there are also the secondary scandals of our own shortcomings, of our sins, which obscure the true and great scandal, and make people think: ‘But they don’t really live on the foundations of God,’” he said.

“But there is so much fidelity!” the pope added. He then prayed that God would “help us to free ourselves from the secondary scandals.”

Pope Benedict often uses language that is difficult for the mass media to understand and interpret, and here was a good example.

Take the word “scandal.” To the media, it means disgraceful action that damages the reputation of an institution – just as the church has been damaged by sex abuse by priests.

But in this talk, the pope was using the word in two very different ways. Jesuit Father Federico Lombardi, the Vatican spokesman, further explained the pope’s remarks to Catholic News Service in a lengthy e-mail.

In saying that the strong faith demonstrated in celibacy is a scandal to the world, the pope meant that it challenges – in a positive sense – the dominant cultural mentality, Father Lombardi said. For the pope, this is the “primary necessity” of the faith, the spokesman said.

The pope’s reference to the sins of priests as “secondary scandals” was widely quoted and drew criticism from sex abuse victims’ groups. But Father Lombardi said the pope meant the phrase not to imply that priestly sex abuse scandals were unimportant, but to indicate that they have nothing to do with “the very nature of the church, and in fact contradict it.”

In this sense, Father Lombardi said, they are of a second order, working against the church’s primary mission.

While acts of abuse can be “very serious and very damaging or absolutely terrible, they are of a completely different type because they are opposed to the ‘positive scandal’ of good witness of the faith and of Christian life,” Father Lombardi said.

Such subtleties might have been understood by the priests who listened to the pope’s extemporaneous talk. For journalists, it was a reminder that Pope Benedict doesn’t speak the language of sound bites.