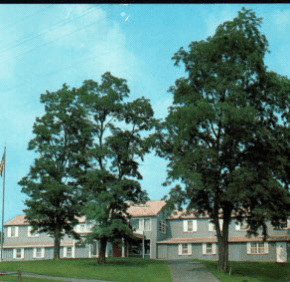 By Elizabeth Lowe
elowe@CatholicReview.org
Twitter: @ReviewLowe
The Monsignor O’Dwyer Retreat House in Sparks, which has boosted the spiritual development of tens of thousands of youths and the young at heart in the Archdiocese of Baltimore, is celebrating its 50th anniversary.
To commemorate the anniversary, a Mass and cookout were held Sept. 8 at the Retreat House. An anniversary gala is scheduled for Nov. 9 at Martin’s Valley Mansion in Cockeysville. For ticket information, call 410-472-2400 or 410-666-2400.
Unfamiliar with the retreat house? Here are some facts courtesy of retreat house staff, the archdiocesan Office of Research and Planning, and Catholic Review archives.
·        Situated on approximately 18 acres in northern Baltimore County, it opened as the CYO Retreat House in September 1963. After his death in 1982, it was renamed to honor Monsignor  Clare J. O’Dwyer, the archdiocesan CYO director in the 1950s and early 1960s.
·        The first to use the Retreat House were 40 seniors from Mount St. Joseph High School in  Irvington. About 1,240 youths attended retreats there the first year.

(Monsignor O’Dwyer)
·        Today, more than 7,000 people use the facility annually. Highlights include Camp GLOW (God Loves Our World), a six-day residential summer camp for Baltimore-area adults with special  needs, and the High School Leadership Institute (HighLi), which works to enhance the teens’ leadership skills and help them to be church leaders.
·        The chapel can seat about 50. Accommodations include 40 student rooms, six adult rooms and two apartments. A staff of 10 runs the house, which underwent major renovations in 2000.
·        Unique features include a tunnel under York Road from the property to undeveloped land across the street.
Also see:
World War II prisoner of war recalls capture, redemption
PrevNext