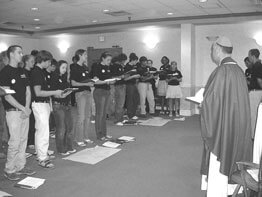 For 45 years, Baltimore-area youths have inhaled a breath of country air and jumped into the swimming pool at the Monsignor O’Dwyer Retreat House in Sparks.

A celebration of the 45th anniversary of the 16-acre facility kicks off on April 12 with a 6 p.m. black tie gala at the retreat house. Classic Catering will provide the food, and valets will provide parking. Two longtime supporters of the retreat house, Michael J. Ruck Sr. and Steve Colueke will be honored at the event.

Those drinking champagne will want to be cautious when they tip their glass. Some 100 people will purchase a glass of champagne for $50 apiece. At the bottom of 99 of those glasses is a pink cubic zirconia. But one of the glasses will have a pink diamond, valued at $2,500, donated by Nelson Coleman Jewelers. Nelson Coleman will have a gemologist on hand to help guests figure out which one is the diamond.

As the retreat house celebrates, plans are underway for still more improvements, including adding a baseball diamond, basketball and volleyball courts, an improved shower facility and more space for day-long events.

The center is in the midst of a one million dollar capital campaign.

“We’re trying to enhance the property and create a softer, more country look,” said Bernadette Moyer, director of development and assistant director of the retreat house, which houses more than 8,000 youths throughout the year. In addition to the major improvements, eyesores such as chain-link fencing will be replaced.

Father Martin Nocchi, director of the retreat house, notes that a facility that can house 86 teenagers at once is constantly in need of refurbishing.

“It’s used hard,” he says with a smile. He knows when youths are playing soccer in one large room because it causes the pictures to fall off the wall in his office.

The center, originally a restaurant, got its start, so legend goes, when Monsignor O’Dwyer was looking for a place strictly for youth. He went to a youth event in a hall, decided the youth deserved better and convinced Cardinal Lawrence Shehan to purchase 50 acres in Sparks, including the property for the retreat center. It then opened its doors as a Catholic Youth Organization day camp but, with the addition of dormitories, quickly grew into the sprawling property it is today.