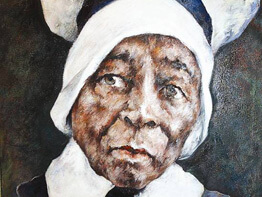 Surrounded by paintings, letters and memorabilia of Oblate Sisters of Providence founder Mother Mary Lange, Sister Virginie Fish, O.S.P. prepares for the day-long celebration marking the 125th anniversary of the candidate for sainthood’s death on Feb. 3.

The event is a tradition the 79-year-old director of the Mother Mary Lange Guild has organized annually since 1991, which will begin 8:30 a.m. in the Chapel at the Our Lady of Mount Providence Convent in Catonsville and end with a 7:30 p.m. service of celebration.

In between the two services, a breakfast will be held at 9 a.m. in the convent dining room, followed by an 11:30 a.m. liturgy of the Eucharist and a 1:30 p.m. dinner.
It’s an event that is expected to draw as many as 200 Catholics and the Oblate Sisters are eager to pay tribute to the woman who laid the foundation for their order and for the education of black children.

Sister Virginie and several colleagues in the Archdiocese of Baltimore have devoted nearly 20 years of their lives to the process of canonization for Mother Mary Lange, a Haitian-born nun who in 1829 co-founded – with Father James Hector Joubert, S.S. – the Oblate Sisters of Providence in Baltimore, the first religious community of African-descended women in the United States.

Along with two other black women, Mother Mary Lange also founded St. Frances Academy in 1828, the first black Catholic school in this country – which is still in existence – providing education for both freed and enslaved students of color.

Father John Bowen, S.S. completed the canonization application two years ago and sent it to Rome, where it is currently under review.

There is no time table for the Vatican to complete or reject sainthood for Mother Mary Lange, Father Bowen said.

“But, I’m confident it will eventually happen,” Sister Virginie interjected, with a crafty grin. “I have word from God it will happen.”

In the mind of Sister Virginie, sainthood is the only natural outcome for Mother Mary Lange, and though she hopes the Vatican will make it official during her lifetime, she says she is prepared to pass leadership of the cause to a capable disciple if the process is prolonged.

Sister Veronica DeLos Santos, O.S.P. is putting together a table of books, cards, videos and other memorabilia about the life of Mother Mary Lange that will be on sale during the day-long celebration.

“There will be a special discount for all of it that day,” Sister Veronica said. “It’s just another way people can feel close to her, and maybe try and emulate her good works.”
Born a slave in what is now Haiti around 1784, Mary Elizabeth Lange appears to have arrived in Fells Point in the 1790s.

A black nun in a slave-holding state, Mother Mary Lange helped found a religious order, establish a school and she and her contemporaries in the Oblate Sisters took in children, widows and elderly women who would have been homeless otherwise.

“She started all of this some 30 years before the Emancipation Proclamation in a slave state,” Sister Virginie said. “My hope is that by remembering Mother Mary Lange in celebrations like this, more people will become aware of the obstacles she overcame to become an instrument of God’s love and grace and realize they too can choose to do the will of God.”

While the events at the convent are being held on the same day Mother Mary Lange died at the age of 98 in the St. Frances Academy building on Chase Street in 1882, the office of African American Ministries of the Archdiocese of Baltimore will host the Mother Mary Lange, O.S.P. Awards Banquet 7 p.m. Feb. 9 at Martins West in Woodlawn.

The AAM hosts this annual event to affirm and celebrate the service and ministry rendered by black Catholics, which include designated areas of leadership, service through the corporal works of mercy, and youth who illustrate both service and leadership within their parish and the archdiocese at large, said Therese Wilson Favors, director of AAM.

“Mother Lange’s dedication to God, compassion, courage and steadfastness makes her a phenomenal leader and servant to God and community,” Ms. Favors said, “virtues of which we should all aspire to achieve.”