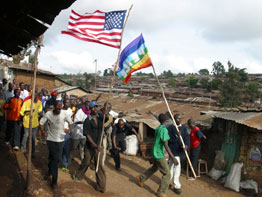 In the Kenyan village of Kogelo, the birthplace of Obama’s late father, villagers sang, cheered and danced in the streets when Obama’s victory was announced. Many draped themselves in U.S. flags or waved them in the air. Hundreds of people gathered to celebrate with Obama’s Kenyan grandmother and members of his extended family.

Kenyan President Mwai Kibaki called Obama’s election victory “a momentous day not only in the history of the United States of America, but also for us in Kenya. The victory of Sen. Obama is our own victory because of his roots here in Kenya. As a country, we are full of pride for his success.”

He also declared Nov. 6 a public holiday in honor of Obama’s victory.

Kenyan Prime Minister Raila Odinga said Obama’s victory will “resonate with hundreds of millions of people around the world,” particularly because of its “message of hope and a vision of a world united in dealing with global challenges,” The Associated Press reported.

Nobel peace laureate and retired Anglican Archbishop Desmond Tutu of South Africa said the Obama victory was similar to when Nelson Mandela became president of that country in 1994. He said the victory gives Africans “a new spring in our walk” and tells them “the sky is the limit.”

Mandela, in a letter of congratulations to Obama, told the president-elect that his victory demonstrates that “no person anywhere in the world should not dare to dream of wanting to change the world for a better place.”

Many African church leaders saw Obama’s victory as a positive sign for their continent.

Vatican Radio quoted Archbishop Gabriel Palmer-Buckle of Accra, Ghana, who said the election of Obama marked a breakthrough for Africa.

“It causes great joy to see that a son of Africa, for once, is the head of what we call the greatest nation on earth. This shows that Africa is capable of arriving at the top,” the archbishop said.

“I think that having a president of the most powerful country who is a son of the Third World will give us Africans a chance to let our voices be heard,” he said.

“I think his winning will bring hope and healing to the whole world,” he told Ecumenical News International. “His election has shown that America is truly democratic.”

The bishop also said he hoped Obama would be able to bring some global attention to African needs.

In South Africa, the Rev. Kenneth Meshoe, a member of Parliament and president of the African Christian Democratic Party, said he hoped Obama’s victory would “improve relations between America and the African continent.”