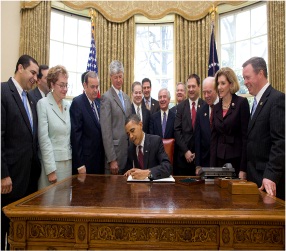 WASHINGTON – In a quiet ceremony before more than a dozen members of Congress, mostly Catholics, President Barack Obama signed an executive order stipulating that no federal funds would be used to pay for abortions under the new health reform law.

The ceremony was closed to the media and the president delivered no remarks about the order, which was promised to a group of pro-life House Democrats in exchange for their votes in favor of the Patient Protection and Affordable Care Act. The legislation passed by a 219-212 vote late March 21.

The text of the order says its aim is to “establish an effective enforcement mechanism to ensure that federal funds are not used for abortion services (except in cases of rape or incest, or when the life of the woman would be endangered), consistent with a long-standing federal statutory restriction that is commonly known as the Hyde amendment.”

“The purpose of this order is to establish a comprehensive, governmentwide set of policies and procedures to achieve this goal and to make certain that all relevant actors – federal officials, state officials (including insurance regulators) and health care providers – are aware of their responsibilities, new and old.”

Cardinal Francis E. George of Chicago, president of the U.S. Conference of Catholic Bishops, said in a March 23 interview that he is apprehensive about whether the executive order will achieve its stated goal, since some legal experts believe the wording of the new law itself, and not the executive order, will be used by courts to decide whether federal funds can be used for abortions.

All are Catholics except for Rahall, a Presbyterian, and Mollohan, a Baptist.

The executive order “maintains current Hyde amendment restrictions governing abortion policy and extends those restrictions to the newly created health insurance exchanges” that will be set up in 2014, it says.

In addition, conscience protections contained the current Church amendment and Weldon amendment “remain intact and new protections prohibit discrimination against health care facilities and health care providers because of an unwillingness to provide, pay for, provide coverage or, or refer for abortions.”

The order directs the head of the Office of Management and Budget and the secretary of the Department of Health and Human Services to draw up “a model set of segregation guidelines for state health insurance commissioners to use when determining whether exchange plans are complying with” requirements that money used to fund abortions be kept separate from other funds.

It also stipulates that appropriations to a new fund for community health centers cannot be used to fund abortions.

“Existing law prohibits these centers from using federal funds to provide abortion services (except in cases of rape or incest, or when the life of the woman would be endangered), as a result of both the Hyde amendment and long-standing regulations containing the Hyde language,” the executive order says.

It directs the HHS secretary “to ensure that program administrators and recipients of federal funds are aware of and comply with the limitations on abortion services imposed on CHCs by existing law.”

Stupak said in a statement after the ceremony that the executive order “protects the sanctity of life,” especially when linked with a conversation he had on the House floor with Rep. Henry Waxman, D-Calif., about Congress’ intent on abortion in the legislation.

“Together, the executive order and the colloquy provide strong assurances that there will be no taxpayer dollars going toward abortion in the health care reform legislation,” he said. “Today’s signing was the culmination of many months of hard work to pass legislation that provided our nation with much-need health care reform while protecting the sanctity of life.”