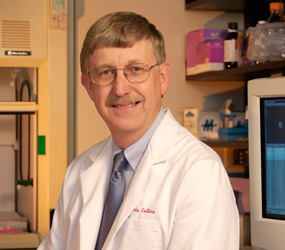 WASHINGTON – President Barack Obama has nominated Dr. Francis S. Collins, the former director of the National Human Genome Research Institute at the National Institutes of Health, to head the 27 institutes and centers that make up NIH.

The appointment was announced at the White House July 8, the day that NIH’s final guidelines for federal funding of embryonic stem-cell research took effect. It must be confirmed by the Senate.

Collins, 59, has long urged scientists not to divorce their work from their spirituality and has said that the discovery of a person’s genes “is not who he is as a person.”

“Are we more than the sum of our genes? You betcha,” he told a 1998 conference in Washington.

He won a Christopher Award in 2007 for his book, “The Language of God: A Scientist Presents Evidence for Belief.” The awards honor works that affirm the highest values of the human spirit.

After leaving the genome project in August 2008, Collins, who has said he became a Christian at age 27, founded the BioLogos Foundation in Washington, which says in its mission statement: “We believe that faith and science both lead to truth about God and creation.”

Born April 14, 1950, in Staunton, Va., Collins was home-schooled until the sixth grade. He earned a bachelor’s degree in chemistry at the University of Virginia in 1970 and a doctorate in physical chemistry at Yale University in 1974.

He later become interested in molecular biology and genetics and enrolled in medical school at the University of North Carolina, where he earned his degree in 1977. He served his residency at North Carolina Memorial Hospital in Chapel Hill from 1978 to 1981.

After a stint as a fellow in human genetics at Yale Medical School, Collins joined the University of Michigan in 1984 in a position that would eventually lead to a professorship of internal medicine and human genetics. While there he discovered the gene responsible for cystic fibrosis and isolated genes linked to other diseases.

Collins became director in 1993 of what was then called the National Center for Human Genome Research. He called the work “an adventure that beats going to the moon or splitting the atom.”

Under Collins’ leadership, the 15-year project of mapping the human genome was completed in April 2003, ahead of schedule and under budget.

In a statement released by the White House July 8, Obama called Collins “one of the top scientists in the world” and said “his groundbreaking work has changed the very ways we consider our health and examine disease.”

“My administration is committed to promoting scientific integrity and pioneering scientific research and I am confident that Dr. Francis Collins will lead the NIH to achieve these goals,” he added.