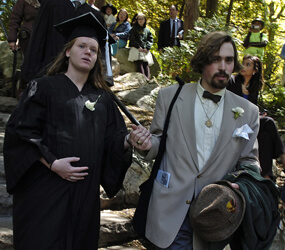 SOUTH BEND, Ind. – President Barack Obama took on the controversy swirling around his commencement address May 17 at the University of Notre Dame, urging those bitterly divided over abortion and other issues to adopt an approach of mutual respect and dialogue.

Welcomed to the ceremony and frequently interrupted with boisterous applause, Obama invoked then-Notre Dame president Holy Cross Father Theodore Hesburgh’s winning an agreement in the 1960s from deeply divided U.S. Civil Rights Commission members during a fishing trip in Wisconsin as a model of persevering dialogue.

“Open hearts. Open minds. Fair-minded words. It’s a way of life that has always been the Notre Dame tradition,” Obama said, positioning dialogue as the hope for solutions to enormous modern problems.

“Your class has come of age at a moment of great consequence for our nation and the world – a rare inflection point in history where the size and scope of the challenges before us require that we remake our world to renew its promise; that we align our deepest values and commitments to the demands of a new age,” he said.

“We must find a way to live together as one human family. Moreover, no one person, or religion, or nation can meet these challenges alone. Our very survival has never required greater cooperation and understanding among all people from all places than at this moment in history.”

Obama listed war, gay rights and embryonic stem-cell research among difficult issues that demand dialogue, but he spent the bulk of his talk on the abortion issue.

Critics of Notre Dame’s decision to invite Obama, including more than 50 bishops, said the president’s support of legal abortion and embryonic stem-cell research made him an inappropriate choice to be a commencement speaker at a Catholic university and to receive an honorary degree from Notre Dame.

The local bishop, Bishop John M. D’Arcy of Forth Wayne-South Bend, announced weeks before he would not attend the ceremony, and a student group, Notre Dame Response, and other protesters held daily demonstrations. On commencement day, the student group also received permission to hold a vigil for life at the grotto on campus as an alternative graduation ceremony.

During the main commencement ceremony in the Joyce Center, a handful of hecklers were escorted out during Obama’s talk – once with a student-led “We are ND” chant drowning out the protesters’ shouts.

Obama said he had learned to choose careful language on the issue during his race for the Senate in Illinois, when a pro-life doctor complained that his Web site referred to abortion opponents as “right-wing ideologues who want to take away a woman’s right to choose.” Obama had the words removed.

“And I said a prayer that night that I might extend the same presumption of good faith to others that the doctor had extended to me,” Obama told the graduates and their families.

“Because when we do that – when we open our hearts and our minds to those who may not think like we do or believe what we do – that’s when we discover at least the possibility of common ground,” he said.

Acknowledging that positions on abortion are in some ways irreconcilable, he urged respect for conscience and recognition of the “heart-wrenching decision for any woman to make, with both spiritual and moral dimensions.”

“So let’s work together to reduce the number of women seeking abortions by reducing unintended pregnancies, and making adoption more available, and providing care and support for women who do carry their child to term,” he said.

“Let’s honor the conscience of those who disagree with abortion, and draft a sensible conscience clause, and make sure that all of our health care policies are grounded in clear ethics and sound science, as well as respect for the equality of women,” he said.

“Each side will continue to make its case to the public with passion and conviction. But surely we can do so without reducing those with differing views to caricature,” he said.

Noting he was not raised in a particularly religious household, he said he was “brought to Christ” by the witness of co-workers in service on the south side of Chicago and Cardinal Joseph Bernardin. Obama acknowledged Catholic parishes helping fund an organization called the Developing Communities Project.

He contrasted faith and certainty, describing a doubt that fosters humility.

“It should compel us to remain open and curious and eager to continue the moral and spiritual debate that began for so many of you within the walls of Notre Dame,” he said.

“And within our vast democracy, this doubt should remind us to persuade through reason, through an appeal whenever we can to universal rather than parochial principles, and most of all through an abiding example of good works, charity, kindness, and service that moves hearts and minds,” fulfilling the golden rule of shared by religions and nonreligious people.

Obama invoked Father Hesburgh’s twin images of Notre Dame as a lighthouse of Catholic wisdom and a crossroads where different cultures can converge. The priest, now 91, attended the commencement.

Obama also recounted how Father Hesburgh, the sole surviving member of the first U.S. Civil Rights Commission, brokered the deal that became the basis of the Civil Rights Act of 1964 by flying the members to Notre Dame’s Land O’ Lakes property: “They fished, and they talked, and they changed the course of history.”

“I will not pretend that the challenges we face will be easy, or that the answers will come quickly, or that all our differences and divisions will fade happily away,” he said. “Life is not that simple. It never has been. quote continues

“But as you leave here today, remember the lessons of Cardinal Bernardin, of Father Hesburgh, of movements for change both large and small,” he continued. “Remember that each of us, endowed with the dignity possessed by all children of God, has the grace to recognize ourselves in one another; to understand that we all seek the same love of family and the same fulfillment of a life well-lived. Remember that in the end, we are all fishermen.”

Holy Cross Father John I. Jenkins, president of Notre Dame, and Judge John T. Noonan, who won the university’s prestigious Laetare Medal in 1984 and delivered a brief speech “in the spirit of the Laetare Medal,” also addressed the protests that erupted after Obama accepted Father Jenkins’ invitation to speak.

In the weeks that followed anti-abortion activists including Randall Terry and Alan Keyes came to South Bend for demonstrations. An airplane-drawn banner depicting an aborted 10-week fetus flew frequently over the campus, and protesters, some pushing baby carriages with dolls stained with fake blood, were arrested.

On May 16 a group of leading Catholic theologians and other leaders published a full-page advertisement in the South Bend Tribune daily newspaper in support of Father Jenkins’ invitation, and the graduating class selected them as their senior fellow. The crowd gave him two standing ovations at the close of the ceremonies.

“More than any problem in the arts or sciences, engineering or medicine, easing the hateful divisions between human beings is the supreme challenge to this age,” Father Jenkins said in his introduction of Obama. “If we can solve this problem, we have a chance to come together and solve all the others.”

Noonan referred to Harvard professor and former U.S. ambassador to the Vatican Mary Ann Glendon, who declined the medal in late April, as making a “lonely, courageous and conscientious choice.”

“I respect her decision,” he said to applause. “At the same time, I am here to confirm that all consciences are not the same; that we can recognize great goodness in our nation’s president without defending all of his multitudinous decisions; and that we can rejoice on this wholly happy occasion.”