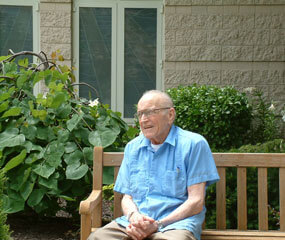 “The only way they got me there was by asking me to offer the opening prayer,” he said with a chuckle.

Of the 100 recipients of the Presidential Service Award, Deacon O’Neill, along with two other volunteers, was particularly singled out for his tireless service to others.

“The award was a nice thing, but anything I’ve done is simply a part of my ministry,” said the 86-year-old retired deacon who was ordained in 1983.

That’s not quite how Oak Crest’s Catholic staff and volunteers see it. When he was honored for his 15 years of service during a Saturday evening Mass in May, his gift of a Luna holder (a glass and gilded metal container which holds the Host securely in place in a monstrance) was accompanied by a collective tribute: “We praise and thank God for this good man, Deacon Harry O’Neill.”

Nearly half of the 900 Oak Crest residents are Catholic, and it has been Deacon O’Neill’s job, as one Catholic staff member put it, “to keep us all on the right track.”

He is particularly recognized for his ministry to the assisted living residents of Oak Crest’s Renaissance Gardens, bringing them Communion and working with representatives of other faiths to make sure special services are available to those who cannot go to the community’s chapel.

A bad back and other health issues have severely restricted Deacon O’Neill’s mobility these days but, climbing aboard his electric scooter, he still manages to help wherever he can.

“Once a deacon, always a deacon,” he said, flashing his infectious grin.

A graduate of Mount St. Mary’s University, when he was only 18, Deacon O’Neill earned his JD degree from Georgetown Law School in 1949 and went on to practice law with his father, the late State Senator Howard S. O’Neill, and later with his brother, James F. O’Neill. He became a state trial magistrate, then a judge of the People’s Court of Harford County, and finally judge of the Maryland District Court from which he retired in 1986.

In between college and law school, however, there was World War II in which he served with distinction when attached to the famed 399th regiment of the 100th Infantry Division.

He was wounded twice, receiving two Purple Hearts and a Bronze Star, awarded for bravery, and the fourth-highest combat award of the U.S. Armed Forces.

He and the other members of his company also received a special medal from the French government for the soldiers’ gallant role in the seizure by the Seventh Army of Bitche, a heavily fortified town in the Low Vosges Mountains.

As with all the many honors Deacon O’Neill has received in his life, he dismisses them modestly, always saying he was “just trying to do my job and what God wanted from me.” He does recall, though, that the members of his war-time infantry company formed a comrades group, calling themselves “the Sons of Bitche.” Of course, he flashed that grin again.

Growing up in Bel Air’s St. Margaret, Deacon O’Neill was active in his parish as a youngster and, later, in the Fallston parish of St. Mark, and continued to be so until he entered the diaconate program.

He married Anna L. Mille in 1952. They raised two daughters and went on to have four grandchildren and two great grandchildren. His wife died in 2004, a great and sad loss for Deacon O’Neill, who often visits “Anna’s Garden” on the Oak Crest grounds, a small patch of colorful flowers and green shrubs planted in memory of Anna O’Neill.

“Why did I want to be a deacon? Well, I felt a calling and I had for a long time wanted to make a greater personal commitment to the church and to God,” he said. “And I wanted to preach. But, to me it was always a matter of what God wants, not what I want. And I guess he wanted me to be a deacon.”