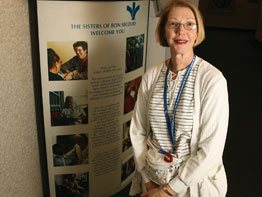 When Phyllis Keehan finds something that works for her, she sticks with it.

The nurse and wound specialist is retiring from Bon Secours Hospital after 43 years – and she learned her profession at the Baltimore hospital’s nursing school.

Over the years, she’s worked in pediatrics, labor and delivery, on medical/surgical floors and as a head nurse.

“I always wanted to be a nurse,” Mrs. Keehan said. “I always liked to do hands-on care with patients and see if I could make them better.”

When she enrolled in nursing school in 1962, Mrs. Keehan’s career choices were limited to her profession, teacher or secretary – a notion that now makes her chuckle.

“Medicine has changed so much,” she said. “When I first started you didn’t do IVs that much and now everything at the bedside is computer-run.”

One of the biggest changes Mrs. Keehan has seen is the development of intensive care units “and having an (intensive care doctor) there who has a robot that walks down the hall at 2 a.m.” The robot sends information to the physician, who can evaluate the patients’ vital signs and heart rate without having to come to the hospital.

As medicine changed, so, too, did her family life.

She stayed at Bon Secours so long because the hospital gave her the flexibility she wanted to raise her three children.

“They always met my needs,” she said.

As her children’s needs changed, Mrs. Keehan picked the shifts that best allowed for family time.

She also enjoyed the camaraderie and family atmosphere of her workplace.

Mrs. Keehan, who is a parishioner of Church of the Nativity, Timonium, said her faith influenced her work – and vice versa.

“You’ve got to believe in God when you see him working,” she said. She also feels a pull to work with the lower-income population in the city. Mrs. Keehan drives past other hospitals on her way to work, but she’s not sure she’d be as satisfied working with more affluent patients.

“I don’t know if I could deal with people who get all this information off the Internet,” she said. “Our clientele is really different. Half of them can’t read. I felt they needed me more than other people. This is a job, but it’s a calling.”

For the 63-year-old mother of three and grandmother of six, retirement will start with a stay in Florida this February and March.

“One of my co-workers said, ‘She’s retiring and going to Disney World,’” Mrs. Keehan said. She loves to ride her bike but suspects that before long, “I’m sure I’ll be volunteering and doing something; you can play only so long and then you have to be useful.”