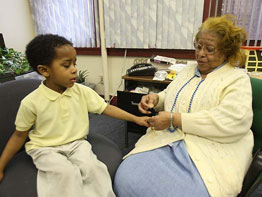 Everyone has a grandma at St. Katharine School in Baltimore and her name is Edwinia Tobias. That’s the loving nickname used by children and faculty alike for their 85-year-old school nurse who has been volunteering fulltime for more than a decade at the Queen of Peace Cluster school.

While “Grandma” said she patches scraped knees “left and right,” much of her time is also spent applying balm to wounds of the soul. Ms. Tobias keeps an open door so youngsters can talk with her about whatever is on their minds.

Ms. Tobias said she is happy to be able to incorporate her Catholic faith in her ministry. She distributes leaflets emphasizing God’s love and she encourages children to study hard, she said.

“I get a good response from them,” said Ms. Tobias, who has also worked in the public schools and with community clinics. “The main thing is to get them to respect themselves so they can respect others.”

A 1940 graduate of St. Frances Academy in Baltimore, Ms. Tobias remembers growing up in an area of East Baltimore that was vibrant and alive.

“My area was beautiful,” she said. “We had fruit trees, grapevines and pretty flowers in the yard.”

Ms. Tobias, a mother of four, grandmother of six and great grandmother of six, lamented the condition of some of the neighborhoods surrounding St. Katharine today. Devastated by urban blight, many of the area row houses are boarded up and tagged with graffiti. On a recent day in March, city garbage crews were busy cleaning out piled-up garbage in a nearby alley.

“It’s a lack of education,” she said.

But Ms. Tobias quickly added that she’s optimistic the students attending St. Katharine can turn things around for Baltimore as they grow up and enter the workforce – putting their Catholic education to good use. They’re eager to make a difference, she said.

Even though Ms. Tobias has started using a walker after she pinched a nerve in her back, “Grandma” has no plans of slowing down or retiring. She feels very supported by the children at St. Katharine and can’t image doing anything else.

“I couldn’t be treated any better if I was a queen,” she said.